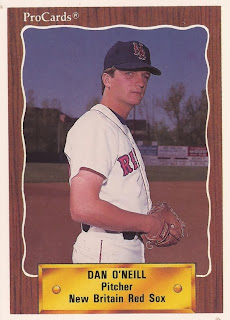 Dan O'Neill had a breakout year in 1990 for the AA New Britain Red Sox, and he did it after his old team let him go.

Going into spring 1991, O'Neill had the attention of the Red Sox manager in Boston, Joe Morgan, according to the Patriot Ledger News Service.

O'Neill went on to play 1991 at AAA Pawtucket, but he couldn't continue the success he'd had the previous year. He also didn't get another year, that one being his last.

O'Neill's career began in 1986, signed by the Tigers as an undrafted free agent out of Quinnipiac University in Connecticut.

With the Tigers, O'Neill started at rookie Bristol, getting into 19 games in relief, with a 4.45 ERA. He moved to single-A Lakeland and single-A Fayetteville for 1987, getting 44 relief appearances between them and a 2.57 ERA. At Fayetteville, he also saved 10.

O'Neill picked up his fourth save of the year for Lakeland in early May, getting out of a ninth-inning jam.

For 1990, O'Neill started back at London. But he got into just two games before being released. Picked up by the Red Sox, though, O'Neill took off.

With New Britain, O'Neill had an early scoreless streak of 21 innings. By the end of the year, O'Neill had a sterling ERA of 0.72 over 35 outings. He also saved 11.