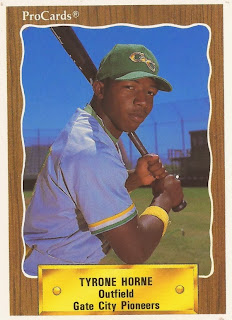 "After the game, I went into the clubhouse to eat the spread and someone turned the TV to ESPN," Horne told MLB.com in 2006. "I'm sitting there eating and watching, and I see this guy running around the bases and realize it's me. So I rushed to the phone to call my mom. It was a very proud moment."

What Horne had done in that 1998 contest was hit for the home run cycle. That's not only four home runs in a single game, but it's a solo home run, a two-run shot, a three-run shot and a grand slam.

It was something no one in the major leagues, or the minor leagues, had ever accomplished. And no one has done it since.

It was also enough for Horne, who played 13 seasons of pro ball, never making the majors, to get a spot in Cooperstown. The bat he used that night in San Antonio is now housed in the Baseball Hall of Fame.

Horne's professional baseball career began in 1989, taken by the Expos in the 44th round of the draft, out of West Montgomery High School in North Carolina.

In high school, Horne played football and basketball, along with baseball. A football injury led to Horne leaving that sport, or else he might have gone to college and tried that, he told his hometown Montgomery Herald.

With the Expos, Horne started in the rookie Gulf Coast League, moving to rookie Gate City for 1990. At Gate City, Horne met his first wife, and set down roots, according to The Herald.

He moved to single-A Sumter for 1991, then single-A Rockford for 1992. He got his first extended time at AA Harrisburg in 1993. He stayed with the Expos system into 1995, when he moved to the Yankees and AA Norwich.

Horne arrived in the Cardinals system for 1998, assigned to AA Arkansas. Late that July, Arkansas and Horne arrived at San Antonio.

He hit the two-run shot, then the grand slam, solo home and, finally, the three-run shot, all in his first four at bats. In his fifth at bat, Horne struck out, according to The Baltimore Sun.

"That is the most cherished accomplishment I could ever have," Horne told The Sun two years later. "I can take my kids to the Hall of Fame and show them that it had never been done before me."

Horne was rewarded that year with three games at AAA Memphis. They were the only games above AA Horne would play.

Horne didn't play a final game until 2001, spending his last two seasons in independent ball, and in Korea.

Horne has gone on to do some coaching, including at his old high school in North Carolina, and in his adopted home state of Idaho. In 2012, Horne was coaching American Legion ball in Idaho Falls, according to Local News 8 in Idaho.

"It's not a bad thing to hit a curve ball into right field and to go the other way and to do something with it," one of his players told Local News 8 of what the player had learned. "It's not always about power, it's about getting the job done."