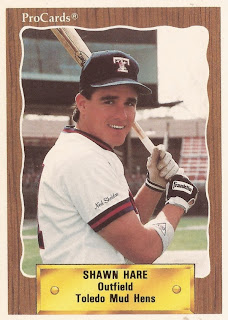 A veteran of parts of two seasons in the majors, Shawn Hare spoke to The Toledo Blade in May 1994 about the importance of that year for him.

He needed to have a good one, to show the Tigers or another team that he could play, and make it back to the bigs.

"I guess the hard part is, year in and year out, it's tough to put up numbers every year," Hare told The Blade. "Sooner or later you're going to have a down year. That's a little bit of pressure because this is a big year, I have to have a big year."

Hare had a big enough first month or so to be taken by the Mets days later off waivers. He also had the most major league playing time that year of his career. But that most time took the form of just 22 games.

Hare continued playing professionally through 1998, but he got back to the majors in just one more season.

Hare's career began in 1989, signed by the Tigers as an amateur free agent, out of Central Michigan University.

Hare returned to Toledo for much of 1991, getting some time at AA London. With Toledo in August, Hare hit two home runs in one game, picking up seven RBIs.

Hare also made Detroit that year, debuting Sept. 6. He got into nine games with the Tigers, getting just one hit in 19 at bats.

Hare started 1992 at Toledo, beginning hot at the plate and he was back in Detroit by May. He got into 15 games through early August, getting three hits in 26 at bats.

In one six-week stretch with Detroit, Hare got just 14 at bats, The Associated Press wrote in August. He got one hit.

Hare played 1993 completely at Toledo, hitting .264. After moving to the Mets, Hare hit .225 in 22 games in New York. He played the remainder of the year at AAA Norfolk.

He continued playing through 1998. He had a brief look with the Cardinals at AAA Louisville in 1996, then played in the Tigers and Yankees systems in 1997. Hare is last recorded as playing in 1998, playing in Korea.