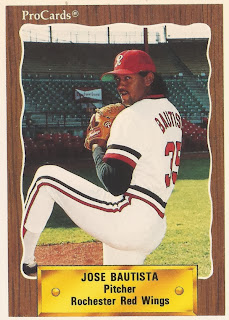 In the middle of his first major league season, one where pitcher Jose Bautista went 6-15 for the 1988 Orioles, was a veritable gem.

On July 5, Bautista took the mound in Chicago against the White Sox and gave up just five hits for a complete-game, 5-1 win.

"Location, that's what I was thinking about tonight," Bautista told The Associated Press after the game. "I threw my fork ball for strikes. But, more important, I went nine innings. I felt great, strong."

Bautista had just been drafted the previous off-season out of the Mets' organization, after spending seven seasons there without making Queens. But that year in 1988 marked the first of nine seasons in which Bautista would see time in the majors, including a 10-3 season with the Cubs in 1993.

And he's continuing in baseball into 2011, as a pitching coach in the system of those same White Sox he beat back in 1988, with the single-A Kannapolis Intimidators.

Jose Joaquin Bautista's career began in 1981, signed by the Mets out of his native Dominican Republic. He played that year at rookie-league Kingsport, moved to single-A Columbia in 1984 then AA Jackson in 1986.

But he didn't make the majors with the Mets, the Orioles selecting him in the Rule 5 draft for 1988. With the Orioles that year, Bautista posted an ERA of 4.30 to go along with that 6-15 record. He also started 25 games.

For 1989, he started 10 games, getting into five more in relief. In June, he went six innings against Oakland for the win, but was demoted. The Orioles needed a rested arm, but Bautista was frustrated nonetheless, The Baltimore Sun wrote.

Bautista got his first win May 30, his first in three seasons. By the end of June, Bautista had strung together three good starts, The Chicago Tribune wrote. Cubs manager Jim Lefebvre liked what he saw.

"He pitched great," Lefebvre told The Tribune after Bautista gave up 12 hits, but kept the damage to three runs. "He gave up some hits, but he didn't give up runs. He kept us in the ballgame, and that's all you ask a pitcher to do. He battled his rear end off."

Bautista stayed with the Cubs through 1994, going 4-5 that second year in 58 relief appearances. He signed for 1995 with the Giants. His ERA that year, though, ballooned to 6.44.

He had one last good year, in 1996 with the Giants. In 37 outings, Bautista posted an ERA of 3.36. His year, though, was cut short in September by an aneurysm in a shoulder and a blood clot, The Associated Press wrote.

He came back for 1997, his final year in the majors, Bautista got into 32 games between Detroit and St. Louis, posting an ERA of 6.66 between them. Bautista stayed in the minors through 1999, going through four separate systems. He is also recorded as playing in Mexico in 2000.

He has since begun a career as a minor league pitching coach. He's served in that position with Burlington, Idaho Falls, Bristol and, for 2011, Kannapolis.

In 2007, as pitching coach for the rookie Burlington Royals, Bautista commended his pitching staff for staying focused in a late August run, according to The Burlington Times News.

"The last week has been real (strong)," Bautista told The Times News. "The most important thing is that they're throwing a lot of strikes."