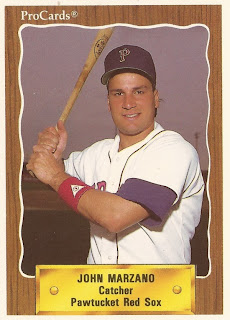 Working as an instructor for young Red Sox in spring 1985, Carl Yastrzemski had some high praise to hand out.

"I'll tell you there's one kid here who really looks good to me," Yastrzemski told UPI in March. "There he is now over there now, getting ready to hit. His name is John Marzano and he was catcher on our Olympic team. Watch him hit. He's got a quick bat and a nice short stride."

Yastrzemski's praise aside, Marzano went on to a career that included playing time in 10 seasons. His career would continue after his playing days as a broadcaster, doing that up until is death in 2008 from a fall.

He was taken by the Red Sox in the first round of the 1984 draft, a year after the Olympics. And he made a quick ascent up the Red Sox ladder. He made AA New Britain in 1985 and Pawtucket and then the majors in 1987.

That year, he got into 52 games for the Red Sox, the most appearances he would have in a single season. He made his first appearance for Boston July 31, an 0-3 outing in a win.

But a few days later, Marzano paid dividends. He went 2 for 4 on Aug. 3, then got at least one hit in eight of his next 10 contests. The streak culminated Aug. 16 when he went 3 for 4 with three runs scored, two of them on home runs.

"I have to remember not to get too high," Marzano told The Associated Press, "but this is still really exciting - getting a home run yesterday and then two today. Hopefully, I'll have a few more games like this."

Marzano went on to hit a total of five home runs that year, three of them in those two games. For his career, he would hit a total of 11. Those 11 came out of 191 career base hits.

While he got his hits from the batter's box, the native of South Philadelphia also got his hits in elsewhere. In August 1996, playing for the Mariners, Marzano got in a shoving match with the Yankees' Paul O'Neill as the benches cleared, according to an account in the New York Times. Earlier that year, in March, Barry Bonds took a swing at Marzano as the catcher tried to keep Bonds from charging the mound.

Marzano stayed with Boston through 1992. Going through the Indians and Phillies minor league systems, Marzano returned to the majors for two games in 1995 with Texas. But he found a new home in 1996, with Seattle, staying with them until the end of his major league career in 1998.

That final year, Marzano wasn't sure he would get it, according to The Seattle Times. He had to wait until a meeting with manager Lou Pinella.

"I'm just so happy," Marzano told reporters as he came out of the meeting, job in hand. "I don't know, can you tell?"

"He was a baseball guy and he loved life," Phillies manager Charlie Manuel told the AP after Marzano's death. Manuel managed Marzano in the Indians system in 1993. "He had a personality. He was kind of a pepper-pot player. He was a go-getting kind of guy. That's what he had to do and it worked for him."