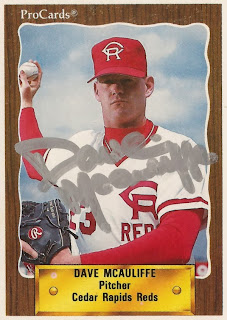 When Dave McAuliffe became a closer, success came fast. Over two seasons, he set team records for saves, he made All-Star teams and the undrafted free agent seemed to be on his way up.

Then he hit AA Chattanooga. By the next spring, he was done.

"I kept waiting for the shoe to drop," McAuliffe told The Greatest 21 Days recently. "I kept looking around the corner. I kept thinking to myself 'this is too good to be true.'"

Then that other shoe did drop, he was released. And McAuliffe's professional baseball career was at an end.

"It's a tough deal because for two-and-a-half years, I was kind of like the guy," McAuliffe said. "I was the closer."

Before it ended, though, McAuliffe got to play in Australia, and he played at AA.

McAuliffe spoke with The Greatest 21 Days recently by phone from his New Jersey home. He spoke of his time growing up and playing the game in Connecticut, his relatively late dream of turning pro, and his run to the Reds organization.

McAuliffe then covered his time in the minors, from his early struggles in rookie ball, with a frank talk from a coach snapping him out of it, to later success as a closer at single-A, and then finally his renewed struggles at AA, his eventual release and progression to life after the pros.
McAuliffe turned closer early on, in fall instructional ball in Florida. It was after his successful 1990 season at single-A Cedar Rapids that McAuliffe got another chance at off-season work, in Australia.

The league, McAuliffe recalled, was competitive, but the newness of the sport in the country showed through. Aluminum bats were allowed. The fans were also new to the game, with the players going out and teaching it on off days.

McAuliffe played for the aptly named Reds in Melbourne. The stadiums were big, he recalled, the crowds small by comparison. But those crowds, as with the long-standing Australian sports, were passionate.

McAuliffe was there with other Americans playing, including Dave Nilsson, Troy O'Leary and John Jaha. Jaha, McAuliffe recalled, would joke with him, that he'd hit against McAuliffe with an aluminum bat.

"Obviously, the opportunity was unbelievable, to spend three-plus months in a foreign country, let alone something as beautiful as Australia," McAuliffe said. "It was good. It was a good learning experience."
Coming back from Australia, McAuliffe was assigned to AA Chattanooga. And he struggled.

On the year, his ERA ballooned to 6.47, over 40.1 innings of work. He also was no longer the closer, the guy. He recorded just three saves on the season.

One outing was particularly bad, he recalled. He only lasted two outs, but gave up eight earned.
Coming back the next spring, McAuliffe expected to return to Chattanooga. With 11 days left in camp, he was released.

His release came with a call to the general manager's office. McAuliffe thought he might be traded. Then he overheard why other players were being called in. McAuliffe got the same speech. His career was over.

Over his brief, four-season career, McAuliffe had played in four separate cities in the Reds system. He'd also played thousands of miles away in the fledgling Australian Baseball League. He got to know people in all of them.

"That's the greatest thing about this game," McAuliffe said. "This game gives you that opportunity to meet people that you would probably never ever get a chance to, and you're talking all kinds of walks of life."

One of the people he met was teammate Reggie Sanders, who would go on to a long career in the majors. The two were teammates for all four of McAuliffe's seasons as a pro.

McAuliffe recalled staying up late at night and talking with Sanders about their upbringing, but also just about their love for the game.
"When I got released, that was the thing that I missed the most," McAuliffe said. "I didn't miss the game as much as I thought I would. ... I missed the long bus rides. I missed those conversations with the guys in the clubhouse, in the bullpen.

"All those things were the things that I missed." McAuliffe said. "Because you really did become family."

After his release, McAuliffe continued to play, just in a wood bat league in New Jersey. He also turned to a new career, insurance.

He and his wife Denise had three boys, now age 16, 14 and 10. Dave and Denise met at the University of New Haven, where both played sports. Denise was captain of the volleyball team.

In 2001, he also went back to school to finish his degree, getting it in business administration. He was setting the proper example for his boys, he said, for them to finish their education.

And McAuliffe is still involved in the game. He coaches youth in his adopted hometown of Maywood, NJ. He and a friend also run a Facebook page, The Baseball Show, sharing baseball links with friends.

As for his boys, McAuliffe said he and his wife have made sure to expose them to sports, but they haven't pushed them in any direction.

McAuliffe likened it to his own youth, one where he played the game, but didn't decide he wanted to play it professionally until he was a senior in high school.

"Just like myself, it took me a while before I figured out where I wanted to go," McAuliffe said, "and I tell my boys the same thing: As long as you participate in something athletically or academically - that's just as good, if not better - but have a passion. Find your passion.

"Once you figure it out, then you'll know what you want to do with your life," McAuliffe said. "That's kind of what I'm doing now."