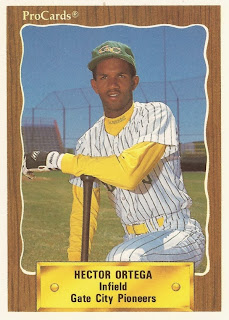 Going into the 2007 playoffs, Cubs scout Hector Ortega had some thoughts for MLB.com on Cubs ace Carlos Zambrano.

Ortega knew Zambrano well, according to MLB.com. Both were from Venezuela and Ortega had known Zambrano since Zambrano was 15.

"He knows what he has to do," Ortega told MLB.com. "Cy Young is one of the things he has on his mind. Win the World Series is first, Cy Young is second. That's the type of guy he is. He's a team player."

Ortega spoke as a scout for the Cubs, having been a player himself for at least seven seasons and a scout and coach in the years since. Ortega's playing career, though, didn't reach the heights that Zambrano's did. Ortega made a brief trip to AAA, but never made it higher.

Ortega's career began in 1989, signed by the Expos as a free agent out of his native Venezuela.

With the Expos, Ortega played his first year as a 16-year-old in the rookie Gulf Coast League. He played 1990 at rookie Gate City, then 1991 at single-A Sumter.

At Sumter, he hit .266, with 36 RBI and 14 stolen bases. He hit a triple to help give Sumter a lead in a June game. He went 3 for 6 in a late-May game, with three RBI. In a July game, he picked up another three hits and three RBI.

With the Brewers, Ortega played at high-A Stockton, hitting .301. He then moved to AA El Paso for 1996, picking up six RBI in a June game. Ortega also got five games at AAA New Orleans, the highest he would get.

Ortega finished out his career in 1997, hitting .264 in 46 games at independent Saskatoon.