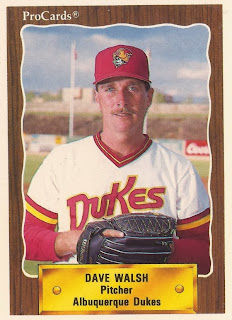 Spring training 1991 came to a close, and the Dodgers signed themselves a new catcher, future Hall of Famer Gary Carter.

"I am happy to still be a Dodger," Walsh told The Los Angeles Times after he was sent down. "I know everybody around here. I can still improve. Who knows what will happen?"

Walsh made Los Angeles the previous August, pitching in 20 games over two months. He posted a 3.76 ERA and even recorded a save.

It was Walsh's first call-up after eight seasons in the minors. He'd been drafted in 1982 by the Blue Jays in the ninth round out of UC Santa Barbara. He'd shown promise in high school, pitching at El Camino Real High in Woodland Hills, Ca. The Times recalled he was part of a "potent righty-lefty combination."

With the Blue Jays system, Walsh started at rookie league Medicine Hat. He made AA Knoxville, then got a taste of AAA Syracuse both in 1984. He got another taste of AAA at Syracuse in 1988, but never made Toronto. He was granted free agency. After pitching well in the Mexican League, Walsh signed with the Dodgers.

He spent 1989 at AA San Antonio and AAA Albuquerque, returning to Albuquerque for 1990. In 47 relief appearances, Walsh put up a 2.61 ERA, picked up six wins and picked up the call to Los Angeles.

Despite pitching well, Walsh didn't make it back to the majors in 1991 or ever. He pitched at Albuquerque for 1991, spent time with the Indians for spring training 1992, but that was it.

Before the Carter decision, Walsh was still being counted among the 1991 Dodgers team, noted in a San Francisco Chronicle story on the religious nature of that year's club.

But, in another wire account, Dodgers executive VP Fred Claire said in a wire account that it was a tough decision on who to cut due to the Carter signing, but a necessary one.

"It's not necessarily a move we want to make," Claire said in a wire account, "but it's a move we have to make."