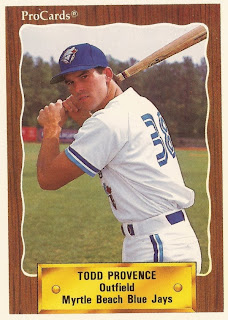 Todd Provence came back from a shoulder injury and, in his first outing back in 1986, didn't pitch as well as he had hoped.

For help, he turned to his manager at single-A Ventura County, Glenn Ezell, he told The Los Angeles Times.

"But Ezell helped me over the last few days with my slider," Provence told The Times, "and it had a good, tight break on it. I'm getting my confidence back. I just had to be patient."

Provence's patience as a pitcher lasted into the next season, when he made AA Knoxville as a reliever. Then Provence stopped pitching and turned position player. As a position player, though, Provence played three more seasons, but never returned to AA.

Province's professional career began 1984, taken by the Blue Jays in the fifth round of the draft, out of Anderson Union High School in California.

Provence then turned hitter. He returned to single-A for 1988, spending the year as a first baseman. As a hitter, Province's average was just .204. His 1989 season was back at Myrtle Beach. It was also just 42 games. But he hit seven home runs, including one in an April game.