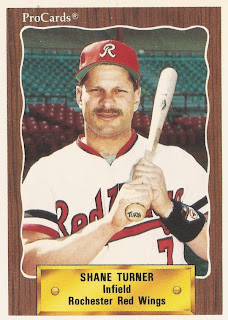 Shane Turner started 1988 at the Phillies' AAA team in Maine, then he got moved back to AA Reading. That was after playing the entire previous season at Reading.

Turner, however, tried to stay positive, according to The Los Angeles Times.

"I had mixed emotions about it," Turner told The Times of the seeming demotion. "I think I proved I could play at this level. I felt I should have had the opportunity to spend all season there (in Maine). But I'm not going to sulk or show anger. I'm just working on my hitting."

Whatever the reason for Turner returning to AA, ended up closer to Philadelphia, both literally and figuratively. It was less than a month after that interview with The Times that Turner made his major league debut.

Turner debuted in the majors in his fourth season of pro ball, and with his second organization. Turner was drafted by the Yankees in the sixth round of the 1985 draft, out of Cal State Fullerton.

Turner spent his first two seasons in the Yankee system, playing at short-season Oneonta and single-A Fort Lauderdale. He got his first look at AAA in 1987, at Columbus. He was traded that June to the Phillies in a three-player deal.

And he started off well with his new team, getting two hits before recording an out at AA Reading, according to The Reading Eagle.

"I'm just trying to feel my way, be a part of the team, and do anything to help," Turner told The Eagle. "So far it's worked out well."

Turner arrived in the Orioles system after another mid-season trade in 1989. He didn't make the majors that year, playing his time after the trade at AAA Rochester, returning there for 1990.

He didn't get back to the majors until 1991, playing four games with the Orioles in July and getting just one at bat. Back in Rochester that September, Turner and teammate Tommy Shields made history by each playing an inning at every position.

Turner's biggest major league stint was still ahead. He signed with the Mariners for 1992, getting into 34 major league games that year.

He also hit .270 for the Mariners. Called up in July, Turner subbed for Edgar Martinez July 7, doubling and scoring. Manager Bill Plummer didn't tell Turner he was playing until just before infield practice, Turner told The Associated Press. "Not knowing helped me stay relaxed," Turner told The AP.

His success that year came after thoughts of retiring, Turner told The Times late that July. He had a family to look after, minor league baseball wasn't doing it. But his wife Beth told him to continue.

"She said she'd rather I play one year too long than quit a year too soon," Turner told The Times. "With expansion coming, we figured I'd play one more year and evaluate the situation at the end of the season. My love for the game and the support from my wife kept me playing."

Turner continued playing for three more seasons after 1992. But, after that run with the Mariners, he never returned to the majors. He last played for the independent Long Beach Barracudas.

He's since gone on to a lengthy career as a minor league manager, last credited managing at AA Connecticut in 2007. In 2002, Turner served as the Giants' roving hitting instructor, after six seasons managing.

But Turner returned to managing for 2003. That's where he believed he belonged.

"I enjoyed what I did last year; partly because it gave me a chance to be home more," Turner told The New London Day in January 2003. "But I missed being on the field and being a factor in the players' careers on a day-to-day basis."