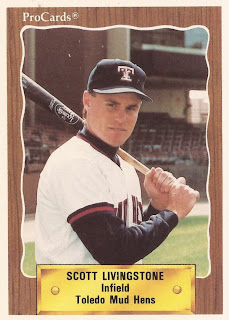 After three seasons as a Tiger, Scott Livingstone was on his way to San Diego in May 1994.

The move not only put Livingstone in new surroundings, but it also gave him the prospect of more playing time.

"I'm ecstatic," Livingstone told The Associated Press. "I think I'm going to get the chance to show myself. I've often wondered what would happen if I got 600 at-bats."

Livingstone had gotten some good time in the majors to that point. In one season, 1992, he'd gotten 354 at bats, hitting .282. But Livingstone wouldn't approach that number, much less 600, again.

Livingstone ended up playing in eight major league seasons, getting just over 1,500 at bats total.

Livingstone's career began in 1988, taken by the Tigers in the second round of the draft, out of Texas A&M. At Texas A&M the previous year, Livingstone played for Team USA in the Pan American Games.

With the Tigers, Livingstone started at single-A Lakeland. He moved to AA London in 1989 then AAA Toledo in 1990.

In July 1991, he made Detroit. Livingstone got into 44 games with the Tigers that year, hitting .291. He also hit two home runs, his first major league home run coming in an early August game.

"I haven't had a lot of chances to practice my homer trot," Livingstone told The AP afterward. "I just don't hit a lot of homers like Cecil (Fielder) or (Lloyd) Moseby."

Going into 1992, Livingstone just looked for a roster spot, with young Travis Fryman getting preference at third. That was also the year he got his most playing time, getting 112 games at third. Fryman played the year at short.

Livingstone got into another 98 games in 1993, hitting .293. Mid-year, though, Tigers manager Sparky Anderson moved Fryman to third. Livingstone moved to DH.

By spring 1994, Fryman was firmly entrenched at third for the Tigers and Livingstone was fighting for playing time.

"All Scott Livingstone will ever do is hit," Anderson told The AP that spring. "If he was anywhere else, he would play and he would hit. But, he's here, and I can't play him."

His final full year with the Padres came in 1996 with 102 games. That May, Livingstone used a pinch-hit single to win a game at Montreal.

Two more seasons, though, and Livingstone was done. He played 1997 between the Padres and the Cardinals. He played 1998 with the Expos, getting into 76 games, hitting just .209.

By the time Livingstone was with the Expos, though, he was largely a pinch-hitter, something Livingstone realized.

"That's my job," Livingstone told The AP after a June win where he knocked in the go-ahead run with a pinch-hit double. "I pinch-hit most of the time. I try and prepare myself to be ready, and fortunately I was looking for the knuckle-curveball."

It was his last year in the majors. Livingstone's playing career ended two seasons later, at AAA with the Rangers.