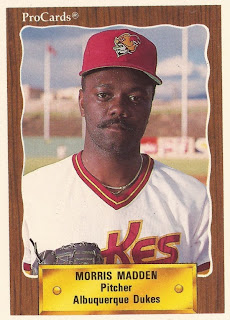 By 1984, Morris Madden was already in his sixth professional season. He was also still in single-A. It was enough for him to look at doing something else, Madden told The Pittsburgh Post-Gazette.

It was his wife Sandra who kept him playing, he told the paper.

"She told me I wasn't a quitter," Madden told The Post-Gazette. "I had never quit anything, and I wasn't about to start being a quitter."

Madden spoke to The Post-Gazette in June 1989, the occasion being Madden was making his first major league start, 10 years after he first entered rookie ball.

Madden entered rookie ball with the Dodgers in 1979, selected in the 24th round of the draft out of Spartanburg Methodist College. He played that year at the Pioneer League's Lethbridge Dodgers.

He made AA for the first time in 1981, the first of four seasons in which Madden would bounce between single-A and AA. He split 1982 between single-A Lodi and AA San Antonio. At Lodi, he went 3-7, but posting a 2.60 ERA. In one stretch, he allowed five earned runs in four games, losing all four, The Lodi News-Sentinel wrote.

In 1984, the year he considered quitting, he played entirely at single-A Tampa, selected by the Reds from the Dodgers in the Rule 5 draft. He returned to Tampa for 1985, also playing that year at AA Vermont.

He didn't see AAA until 1987, after signing as a free agent with the Tigers. That was also the year he debuted in the majors, as a reliever. Madden got into two games that June, giving up three runs in 1.2 innings.

In one of those outings, Detroit Manager Sparky Anderson didn't want to use Madden, The Associated Press wrote. "I don't like to have kids learn to pitch in the bullpen," Anderson told The AP.

The Tigers traded Madden to the Pirates that August. He got into five games for Pittsburgh in 1988, amounting to 5.2 innings. He gave up no earned runs.

Going into the next spring, Madden had problems throwing strikes, The Pittsburgh Press wrote. But he pitched well at AAA Buffalo early, and was called up to Pittsburgh.

He got is first win days later in relief. Helping Madden get the victory against the Cardinals was an Ozzie Smith error, according to UPI.

"I've waited 10 years for this and I feel great," Madden told UPI afterward. "We were in it the whole way. When I went into the game and it was 3-2, I expected to win."

It was that June that Madden got his first start. In four innings of work that June 13, Madden gave up one earned run. In his next outing June 18, he gave up four earned runs in five innings. His starts came after a rash of Pittsburgh injuries.

"I think he's got a real future as a reliever," Pirates Manager Jim Leyland told reporters after the June 18 outing. "He's got the stuff to throw hard for a few innings, and he can come in and throw strikes."

Despite Leyland's prediction, Madden's future in the majors consisted of just one more game. He started June 23, gave up two earned runs and didn't record an out.

Madden played one more season, back with the Dodgers at AAA Albuquerque, ending his playing career. Madden is in 2013 as president of Carolinas Metro Inc. Baseball and Softball in the Charlotte area.