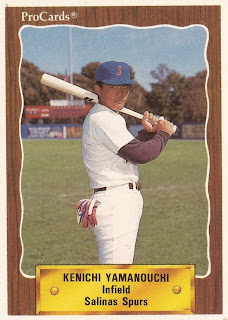 Kenichi Yamanouchi seemed to like hitting against Modesto, at least in this particular series in May 1990, according to The Modesto Bee.

That's because, in the first two games of the series, the Salinas Spur Yamanouchi launched three home runs, the third pulling Salinas within two runs of the lead, according to the Bee.

Yamanouchi went on to play the rest of that year and the next with the high-A Spurs. He only hit three other home runs. He is also only recorded as playing for one other team, the Daiei Hawks in his native Japan.

Yamanouchi's brief career in baseball began in Japan, a graduate of Fukuoka Daiichi High School. He was taken by Daiei in the fifth round of the draft. Yamanouchi's name has also been spelled Kenichi Yamanochi and Kenichi Yamawouchi. The Japanese form is 山之内健一.

With Daiei in Nippon Professional Baseball, Yamanouchi got into seven games as an infielder, getting eight at bats. He is not recorded as getting a hit, striking out four times.

That same year, Yamanouchi was sent to play for Salinas. With Salinas, Yamanouchi got into 114 games, hitting .204 with five home runs and 31 RBI. He also scored 36 runs, but was thrown out trying to score in an early-September game.

In June, The Philadelphia Inquirer visited the Spurs, noting the Japanese players' efforts to learn the American game. Among the fruits of those efforts was Yamanouchi, nicknamed Jerry, learning how to swear like American players.

"Jerry's learning real fast how to act like an American player," Yamanouchi teammate at Salinas Bill Carlson told The Inquirer.

Yamanouchi returned to Salinas for 1991, getting into another 90 games. This time, he hit a better .242, but only hit a single home run and had 14 RBI.