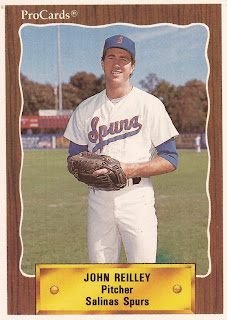 John Reilley returned to the USC Trojans for 1987 an improved pitcher, The Los Angeles Times wrote.

After going 2-8 for USC after transferring from junior college the previous year, by February 1987, Reilly was already 2-1.

"He is an absolute key for us," USC coach Mike Gillespie told The Times.

Reilley ended up going 6-6 that year for USC, but he pitched well enough to catch the eye of the Braves, who signed him as an undrafted free agent. Reilley, though, couldn't pitch well enough for a long career. He played just four seasons, never making it above single-A.

Reilley's career began that year in 1987, four years after he was first drafted. Reilley was first drafted out of Westlake High School in California, taken by the Giants in the 14th round of the 1983 draft, but he did not sign. In between high school and USC, Reilley played at Valley and Oxnard colleges.

With the Braves, Reilley played between the rookie Gulf Coast League and rookie Pulaski team. He posted a 3.51 ERA over 21 relief outings between them. He also picked up three saves.

He moved to single-A Sumter for 1988. Over 36 outings, two starts, Reilley's ERA hit 5.89. He picked up a relief win in a May game, giving up one hit in an inning of work. In an August contest, he went four innings of relief, giving up three hits and one earned run.

For 1989, Reilley moved to the Mariners system and single-A Wausau. There, he got into 43 games, finishing with a 5.81 ERA. It was his last season in affiliated ball.