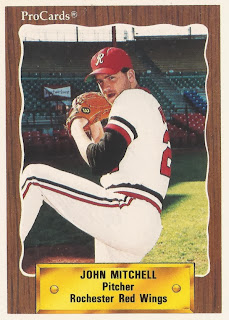 John Mitchell went the distance against the Phillies June 19, 1987, giving up a single run. It was his first complete game, and his first major league win.

It was his eighth major league start.

"I'm happy I finally got the win," Mitchell told The Associated Press after the game, adding later, "I had a chance for the shutout, but I didn't get it. That's Okay. Now I can go out and have confidence."

Less than four years earlier, Mitchell was simply happy to be alive.

In November 1983, Mitchell and two Red Sox system teammates, Scott Skripko and Tony Latham, went out on a fishing trip with the owner of the boat, Mark Zastowny. It was on their day off between Red Sox instructional league games.

The boat capsized. For 22 hours, Mitchell clung to a cooler and part of a life preserver. Skripko survived 20 hours before being rescued. Latham, who'd played the previous season a single-A Winston-Salem, and the boat owner Zastowny did not survive.

Mitchell's career in professional baseball had begun just months before, taken by the Red Sox in the seventh round of the draft out Overton High School in Tennessee. The Red Sox were the same organization that signed his brother Charlie Mitchell the year before.

For 1986, Mitchell arrived in the Mets system, dealt there in an eight-player deal. He played the year at AAA Tidewater, making his major league debut in September.

Mitchell got into four games for the Mets that year, giving up four earned runs in 10 innings. He returned for 1987, getting that first win and two others. He went 3-6, with a 4.11 ERA.

The next spring, Mitchell worked to make the Baltimore roster and pitched well enough to get noticed, getting into 24 games that year, starting 17.

"You're happy you threw the ball well, but you're trying to make the team," Mitchell told the Associated Press late in spring training. "You want to pitch perfect every time. You want to get everybody out."

Against the White Sox July 7, Mitchell went eight innings, giving up one run. That was after an outing where he went two and gave up six. The implications were obvious, Mitchell told The Chicago Tribune after the White Sox outing.

"I'm not stupid," Mitchell told The Tribune. "I sensed I needed a good outing, and that if I did not contribute, I might not be around here very much longer."

While Mitchell stuck around for the rest of the season, it was his last in the majors. He played 1991 with the Mariners at AAA Calgary and continued playing in affiliated and independent ball through 1998.

In 2009, Mitchell was in his hometown of Nashville working for a municipal castings company, according to Sports Illustrated. The magazine retold the story of the 1983 boat accident after another boat accident claimed the lives of three football players.

When Sports Illustrated caught up with Mitchell, he was married, with three children. His then-13-year-old son was named Johnny Latham Mitchell.

"I don't think about that experience all the time anymore," Mitchell told Sports Illustrated. "But it will never leave me. Never."