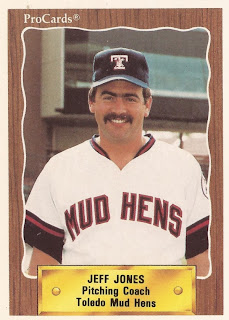 The Detroit Tigers bullpen coach, however, wasn't working with young Tigers pitchers. He was working with little leaguers.

"We’re working on basic things," Jones told The Gaylord Herald Times in an October 2009 visit. "Getting into an athletic postion. It is something that we have to work on even with our big leaguers."

Jones has worked with many young pitchers through his more than 20 years of coaching, though usually the young pitchers are a little older than the Gaylord little leaguers.

Jones' coaching career began in 1988 at Bristol, Conn., a year after his playing career ended. The player Jones played a decade of pro ball, taken by the Athletics in the 13th round of the 1977 draft.

He made the Oakland bullpen in April 1980. He would return to Oakland for part of each season through 1984, playing there in a total of five campaigns, seeing 112 outings.

By 1986, he was with the Tigers organization, where he remains for 2010, a quarter century later.

Pitching at AA Glens Falls, Jones then to AAA Toledo. At Toledo, Jones pitched well, though not well enough to pitch in Detroit.

"The big difference is concentration," Jones told The Toledo Blade after a 1987 outing, comparing his time in Toledo to his time in Glens Falls. "It just seemed like whenever I needed to make a big pitch there, I didn't. Here, I have."

Jones has been trying to impart that concentration into pitchers in the Tigers system since. He hit Toledo again, this time as pitching coach, in 1990. Much of his coaching time has been spent in Toledo and Detroit.

In 1995, Jones made Detroit for the first time as bullpen coach, along with pitching coach Ralph Treuel, helping the team move to a younger staff.

"We feel very strongly that the presence and guidance of two young, competent coaches like Treuel and Jones is going to help significantly in the transition," Detroit General Manager Joe Klein told the Lakeland Ledger in December 1994.

Into 2010, Jones is working with young Tiger pitchers like Rick Porcello, who got off to a slow start on the year. Jones continued as Tigers pitching coach in 2013.

"He wants to get back to what he was doing before," Jones told MLB.com of Porcello. "And he will. None of us are worried."