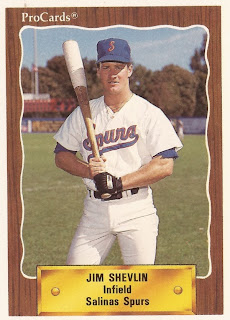 The first James Shevlin, known as Jimmy Shevlin, first took the field as a pro, nearly 60 years earlier, in 1931. Jimmy Shevlin started at single-A Albany and AA Toronto and played for nearly a decade.

That Jimmy Shevlin also played parts of three seasons in the majors, one season with Detroit and two with the Reds.

For James Shevlin, in 1989, his career was much shorter. The James Shevlin of 1989 also never made AA. (It's unclear if there is any relation between the two Shevlins)

James Shevlin's career began in 1989, signed by the independent Salinas Spurs as a free agent out of Massapequa, NY.

Shevlin returned to the Spurs for 1990, but his season was even shorter than his first. He got into just 19 games, getting nine hits in 54 at bats for a .167 average. Those 19 games were the final games of James Shevlin's career.