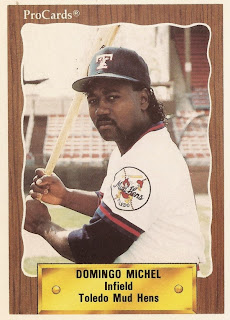 Asked at a February 1988 press conference who he thought should start at third base for the Dodgers, Pedro Guerrero had a ready response, The Los Angeles Times reported.

Michel, who is also referred to as Guerrero's half-brother, though, never got to play third base for the Dodgers or anyone else in the majors.

Michel played eight seasons in affiliated ball, getting as high as AAA, but never making the majors.

Michel's career began in 1984, signed by the Dodgers as an undrafted free agent out of his native Dominican Republic. The Dodgers signed for $3,500, an amount Guerrero told The Times in 1985 that he believed should have been more.

Michel moved to single-A Vero Beach in 1986, hitting .300. In late August, Michel worked a single, after fouling off four pitches.

Back at Toledo in 1990, Michel improved to a .269 average on the year, with seven home runs. Michel hit a go-ahead fifth-inning shot in late May. In June, he hit two in three days of each other, a three-run home run June 20 and a two-run shot two days later.

It was his last year at AAA. His last year in affiliated ball came in 1991, with 49 games at AA London.

Michel went on to play several years in the Mexican League and had a stint in Taiwan, before returning in 1999 with the independent Rio Grande Valley of the Texas-Louisiana League, ending his career.

Michel has gone on to return to the Dominican Republic, but continue his involvement with baseball. In 2011, he was hitting coach for the White Sox' team in the Dominican Summer League.