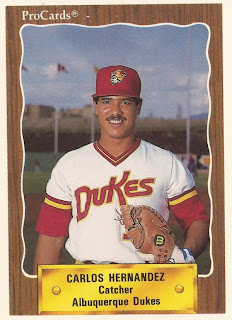 Carlos Hernandez played well as a starter for the Dodgers in 1994. In his first seven starts that year, he was 7 for 25, The Associated Press wrote.

The problem for Hernandez was, those starts came few and far between. Hernandez was the backup catcher for the Dodgers, the regular starter was Mike Piazza.

"I just want to play," Hernandez told The AP at the end of May. "You guys saw what kind of job I've been doing. If you don't get a chance to play every day, it's hard to prove what you can do. But I'm positive all the time, working hard every day and ready to do my job."

Hernandez stayed ready to do his job in a total of 10 major league seasons. In only one of those seasons did Hernandez play in more than 100 games, getting into 129 in 1998.

Hernandez' career began back in 1984, signed by the Dodgers as an amateur free agent out of his native Venezuela.

He played his first two seasons in the rookie Gulf Coast League, hitting single-A Bakersfield in 1987, AA San Antonio in 1989.

Hernandez made the majors having an entire nation watch his every move, even with limited playing time, The Los Angeles Times wrote in 1992. And Hernandez would return home to a hero's welcome.

"I come home from the season and the kids are waiting at the airport, little kids in baseball uniforms, all of them shouting, 'We want to be Carlos Hernandez,' " Hernandez told The Times. "I ask them, 'Why me?' They say, 'Because you are a star and you still come home to us.'"

He signed with the Padres for 1997. The next year he finally became a regular, helping the Padres to the World Series.

"We thought he'd be a backup but he became a leader on our ball club," Tony Gwynn told MLB.com years later of Hernandez. "He was a clutch guy and became a really good hitter. And he was really smart."

Hernandez sat out 1999 injured, playing just one more season in the majors after that, 75 games between the Padres and the Cardinals in 2000.

By 2008, Hernandez was still in baseball, as an analyst for FOX Sports in Espanol and for DirecTV, according to MLB.com.