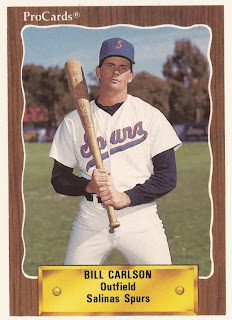 Giants scout George Genovese spotted young Bill Carlson in 1986 and liked what he saw, according to The Los Angeles Times.

By January 1987, Carlson was a young Giant farmhand, signing with Genovese' club as a free agent.

"George tells me I have a Jack Clark and Garry Maddox style," Carlson told The Times in February 1988 in an article on Genovese. "He gives you all the confidence you need. He's always pumping everyone up."

Carlson's professional career began that year in 1987, signing with the Giants out of the University of Florida.

At Florida in March 1986, Carlson doubled and scored on a home run. He went to Florida out of the College of the Canyons in California.

With the Giants, Carlson played 1987 between rookie Pocatello and single-A Clinton. At Pocatello, Carlson hit .324 with 10 home runs over 68 games. At Clinton, though, in 20 games there, he hit just .220 with no home runs.

That season with San Jose was his final one with the Giants. For 1990, Carlson signed with independent Salinas. Over 139 games, he hit .261, with 12 home runs.

He also played on a team that eatured multiple players from Japan.

"They're good guys," Carlson told The Philadelphia Inquirer that June, "but most of them just don't speak enough English to feel comfortable socializing. So they stay in their apartments, watching videos sent from home."

Carlson returned to Salinas for 1991, getting into 53 games. He also saw time in Mexico, at Campeche and San Luis Potosi. It was his final year as a pro.