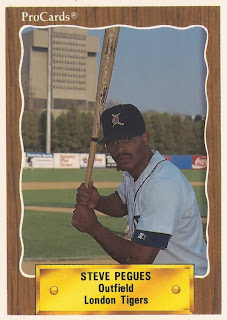 Steve Pegues was never much of a home run hitter. In a professional career that spanned 11 minor league seasons, and parts of two in the majors, he hit only 70 home runs combined.

But on June 19, 1995, Pegues was every bit a home run hitter. After going homerless in his first 98 major league at bats, this day, Pegues hit two, sparking his Pirates to an 8-2 win.

"I've gone up there a lot in batting practice, but I seem to fall behind in games," Pegues told The Associated Press afterward. "I'm glad to get those out of the way. I haven't hit two homers in a game since high school."

Pegues went on to hit four more home runs for the Pirates that year, bringing his career major league total to six. That is where it would end, with Pegues never returning to the majors.

Hopes had initially been higher for Pegues. He was drafted by the Tigers in the first round of the 1987 draft, 21st overall. Joe McDonald, a Tigers VP, told The AP after the draft that Pegues possessed "good raw talent," and had "tremendous potential."

But it would be slow going. It took Pegues three seasons to get out of A-ball. Playing for single-A Lakeland in July 1989, Pegues went 3 for 4 in one game, with a triple that sparked the Lakeland scoring.

Pegues made AA London in 1990. In one late April game, Pegues collected a total of seven hits in 14 innings, increasing his batting average 125 points on the night. He then hit AAA Toledo in 1991.

But his potential wouldn't be realized with the Tigers. The Padres took him off waivers for 1992, sending him to AAA Las Vegas for two seasons. In one of his early games, Pegues was on the receiving end of a Benny Distefano punch, resulting in a brawl that injured three pitchers.

It wasn't until 1994, when he was signed by a free agent by the Reds, that Pegues finally got a look at the majors, that July. Pegues went 3 for 10 for the Reds that month in limited action before being released. Soon signed by the Pirates, Pegues appeared in seven more contests that year.

Back with Pittsburgh for 1995, Pegues spent the season with the big club. He appeared in 82 games, hitting .246. After that two-home run game in June, Pegues hit two more in July and two more in August. One of the July home runs came in a 7-6 Pirates win July 13.