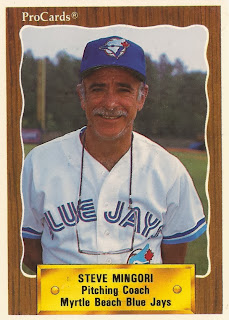 But he made it, and he soon proved his worth, posting a sub-2 ERA by early June, doing it by getting his breaking pitches over the plate, The Journal-World wrote.

"That's what I've been doing all year," Mingori told The Journal-World. "And that's why I've been successful."

Mingori ended up being successful enough to get himself into a total of 10 major league seasons, making the playoffs in three of them with the Royals.

He also was successful enough for a brief career in coaching, one where he didn't return to the bigs.

Mingori's career in baseball began in 1965, signed by the Reds as an amateur free agent out of Pittsburg State University in Kansas. He went to Pittsburg out of Kansas City's Rockhurst High School.

Mingori played his first two seasons largely at single-A Peninsula. In his second year there, he got to see the final pro start of Hall of Famer Satchel Paige. Mingori was the starter who was bumped, according to The Newport News Daily Press.

"I was in awe of Satchel Paige," Mingori told The Daily Press years later. "I remember watching him warm up, following him around, just watching everything he did before the game. I never saw a guy who could hit spots like that. Even at his age, he could hit a dime on home plate."

Mingori's career steadily progressed, making AAA Indianapolis for 1968. He moved to the Indians for 1970 in a trade, then made his major league debut that August.

Mingori stayed with the Indians until into 1973, traded that June to the Royals. Returning to Cleveland in late-May, Mingori set down 12 in a row in a relief outing. He also got some boos from the Cleveland fans, The Associated Press wrote.

"I was hurt at first when I heard the crowd booing, " Mingori told The AP. "I got mad and it makes you pitch better."

His playing career over, Mingori later started a coaching career. By 1987, he was coaching in the minors with the Blue Jays. For 1990, he served as pitching coach at single-A Myrtle Beach.