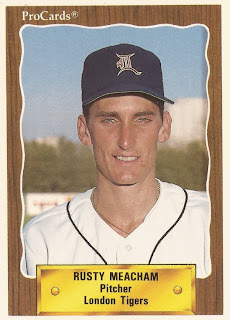 Called into the ninth inning of this spring 1991 game, Rusty Meacham did what he needed to do.

He went out and pitched a perfect inning. He also impressed his manager, according to The Associated Press.

"I can tell by the way he pitches he ain't afraid of nobody," Anderson told The AP of Meacham. "He'll throw it up there and let you take your hacks."

Meacham impressed enough for Anderson and the Tigers to remember him later that year, getting his first call up to Detroit. He then impressed enough later to make the majors in a total of eight seasons.

Meacham's career began in 1987, taken by the Tigers in the 33rd round of the draft, out of Indian River Community College in Florida. He then signed the next May.

With the Tigers, Meacham started at rookie Bristol and single-A Fayetteville. He returned to Fayetteville and played at single-A Lakeland in 1989. He made AA London for 1990, then AAA Toledo to start 1991.

That June, Meacham explained his mindset as a reliever to The Lawrence Journal-World.

"You've got to be a bit crazy," Meacham told The Journal-World. "Relievers - we come in at times with base runners on. I came up here and the first batter I faced was Jose Canseco. There's no room for mistakes."

Meacham got into 15 games for Seattle that year, then spent three seasons in the minors in five different systems. He then returned to the bigs for five games with the Astros in 2000 and 24 with the Devil Rays in 2001, ending his major league career.

Meacham then finished his playing career in independent ball, getting 16 starts for Yuma in 2005. He also has spent time coaching short-season Vermont.

Meacham has since gone on to run a youth baseball summer camp. Meacham told The Treasure Coast Newspapers that his goal is to get young players to play better, so they don't get hurt.