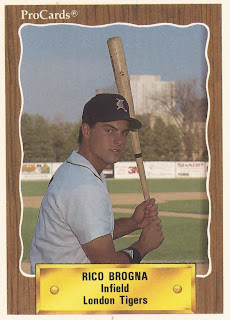 Rico Brogna didn't have much of a chance to make the Tigers in 1994, The New York Times wrote. Cecil Fielder was blocking his way.

Then Brogna was traded. And, a year later, Brogna was the starting first baseman for the New York Mets.

"The biggest difference this year is that when I walk into the clubhouse, I feel like I'm part of a team," Brogna told The Times. "I knew there I never had a chance to make it. Here I belong, and that's the best feeling of all."

Brogna ended up proving he belonged in the majors, playing there that season and six more after that, becoming a mainstay in the lineup for the Mets and later the Phillies.

Brogna also ended up hitting at least 20 home runs in a season four times, hitting 106 on his career in all, while knocking in 458.

Brogna's professional career began in 1988, taken by the Tigers in the first round of the draft, out of Watertown High School in Connecticut.

With the Tigers, Brogna started at rookie Bristol, making single-A Lakeland in 1989 and then AA London in 1990. Brogna made it to AAA Toledo for part of 1991 and then most of 1992.

It was in August 1992 that Brogna made his major league debut, getting five hits in 26 at bats. He then spent all of 1993 back at Toledo.

After a shortened 1996, Brogna went to the Phillies in another trade. He stayed there for three full seasons, hitting at least 20 home runs in each. In 1998 and 1999, Brogna knocked in more than 100 runs.

Brogna played and did well in the majors despite a rare genetic condition known as ankylosing spondylitis, a kind of arthritis, according to The Philadelphia Inquirer. The treatment then dropped his energy levels.

"But I'm able to muster enough energy for the three or four hours a day when it's needed," Brogna told The Inquirer, referring to his time on the field. "Plus, the adrenalin rush you get from playing in a major-league game helps."

Brogna finished out his career with 81 games in 2000, played with the Phillies and the Red Sox, and then 72 games in 2001 with the Braves.

In August 2000, just after arriving with the Red Sox, Brogna hit a walk-off grand slam.

"This is a pretty exciting moment for me," Brogna told reporters afterward. "When I got the count to 2-2, I figured this was one of his last chances to throw me a breaking ball. Fortunately, I was looking for it. I didn't exactly pull a Carlton Fisk, but I was waving it over the right fielder's head."