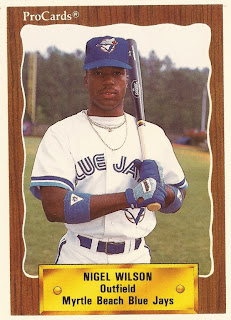 In five seasons, Nigel Wilson's path to what he hoped was the majors had gotten him to AA, but no higher.

That off-season in 1992, Wilson's path to the majors appeared to get a lot shorter, taken by the Marlins as their first pick in the expansion draft.

"It's no joke. I'm here... I'm almost in tears right now," Wilson told The Associated Press after his selection. "I've never had anything like this happen in my life."

And with that selection, Wilson did make the majors in 1993, but his stay was brief, just seven games that September. He went on to see time in three major league seasons, but totaled only 22 games played.

Wilson went on to have more success, though, in Japan. There, Wilson became a power hitter. In six seasons in Japan, playing mainly for the Nippon Ham Fighters, Wilson topped 30 home runs in a season three times.

Wilson's professional career began in 1987, signed by the Blue Jays as an amateur free agent out of Ajax High School in California.

With the Blue Jays, Wilson played his first two years at short-season St. Catharines, moving to single-A Myrtle Beach in 1990. He moved to high-A Dunedin for 1991, then AA Knoxville in 1992.

Then came his selection by the Marlins. After playing the year at AAA Edmonton, Wilson got his call to Miami in September. He also found trouble with striking out. In his first 12 at bats, Wilson struck out seven times, The South Florida Sun-Sentinel wrote.

"I need to be relaxed, that's all," Wilson told The Sun-Sentinel in the midst of his troubles at the plate. "I'm pressing a little bit, chasing at bad balls because I'm anxious to get my first hit. After I get the first, that's when I'll be able to relax. I know it will all come in due time."

Wilson ended up getting a total of 16 at bats that September for the Marlins. He struck out in 11 of them. He also didn't get a hit.

He then spent all of 1994 at AAA Edmonton, moving to the Indians for 1995. With Cleveland, Wilson returned to the majors, for another five games. This time, he went 0 for 7, striking out four times.

Wilson finally got his first major league hit in 1996, in 10 games spent back with the Indians. He picked up a total of three hits in 13 plate appearances. Two of those hits were home runs.

From there, Wilson moved to Japan. He played 134 games for the Nippon Ham Fighters in 1997, hitting 37 home runs and knocking in 94. His home run total gave him the league crown.

For 1998, Wilson hit another 33 home runs, knocking in 124. He also captured his second-straight home run title.