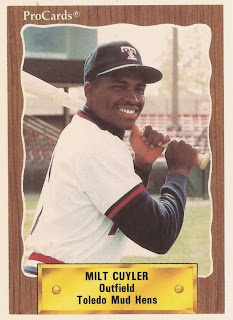 Milt Cuyler broke for third base, stopped, then broke again.

He made it, ultimately scoring the go-ahead run in that April 1991 contest. But his manager Sparky Anderson wasn't happy that Cuyler hesitated, UPI wrote.

"I thought I had a bad jump, but I know now I should never back down," Cuyler told UPI afterward. "I'll run into some mistakes, but I'll run out of some, too."

Before his career was out, Cuyler had played in a total of eight major league seasons. He has since gone on to a long career as a coach in the minors.

Cuyler's career began in 1986, taken by the Tigers in the second round, out of Southwest High School in Macon, Ga.

Cuyler played that first year at rookie Bristol, hitting .230. He played the next two seasons at single-A, before making AA London and AAA Toledo in 1989. Cuyler returned to Toledo in 1990, debuting in Detroit that September.

In 1991, though, Cuyler made Detroit to stay. He got into 154 total games. He also hit three home runs. His first came in May, a grand slam.

"I was on second base when it went into the stands, because I was looking to get a triple," Cuyler told The Associated Press. "I wasn't even thinking about a homer."

Cuyler returned in 1992 for another 89 games. His average, though, dropped to .241. His steals dropped to just eight.

He also started the year in a slump. His manager had to suggest a different stance, crouching more, something that helped lead to two singles, The AP wrote.

By June 1996, Cuyler was still working. He earned the Red Sox starting centerfield job through his defensive work, The Hartford Courant wrote. He also earned it through simple hard work.

"My goal was just to make the team," Cuyler told The Courant. "I thank God they gave me the opportunity. But now I have to work even harder. I can't think about what I did yesterday because that's over."

It was Cuyler's last significant time in the majors. He got into 50 games for the Red Sox that year, hitting .200. He returned for seven more games in 1998, with the Rangers, ending his major league career.

Cuyler played one more year in the minors, in affiliated ball, and two more in independent ball, ending his playing days.

Cuyler, though, started a coaching career has spanned a decade and included time as a hitting coach in the Gulf Coast League with the Twins. He is set to return to the GCL in 2012, teaching outfield and base running.