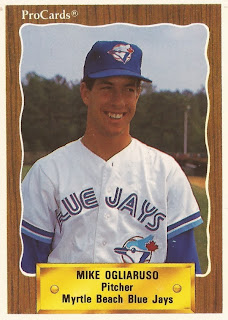 "I wanted somewhere to go where I would be comfortable," Ogliaruso told The Orlando Sentinel in June 1988. "I felt Stetson would be the place."

By then, though, Ogliaruso had another choice to make. Should he actually go to Stetson? Or should he pursue his career in the pros as a sixth-round draft pick of the Blue Jays?

Ogliaruso ultimately chose the pros. Ogliaruso's ended up being a career that lasted five seasons, never getting above AA.

Ogliaruso's career began that June, taken by the Blue Jays out of Clearwater's Countryside High School.

At Countryside, Ogliaruso drew attention with performances like one in April 1986, where Ogliaruso and another pitcher combined on a three-hit shutout. His senior year, Ogliaruso struck out 120 over 78 innings, according to The Sentinel.

"He may or may not do it sign with Toronto," Ogliaruso's high school coach John Stuart told The Sentinel after Ogliaruso's selection. "It's kind of scary. You have to put yourself in his shoes. He would be getting money and playing pro ball."

Ogliaruso did sign and, with the Blue Jays, he played his first year between rookie Medicine Hat and single-A Dunedin. At Medicine Hat, Ogliaruso went 0-6, with a 9.17 ERA. At Dunedin, though, he went 2-1 over four outings, with a stellar 1.08 ERA.

Ogliaruso played 1990 exclusively at Myrtle Beach, going 14-9, with a 2.52 ERA. In 1991, he got his first look at AA Knoxville, getting seven outings, six starts. In an early August, Ogliaruso went the distance in a game against Orlando, giving up six hits and picking up the win.