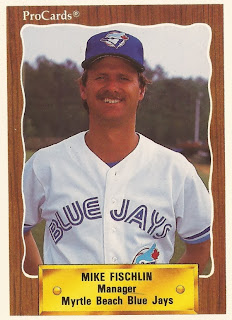 Mike Fischlin had hardly gotten two hits in a major league game before, much less this, according to The Toledo Blade.

But, in the third inning of this June 1982 game with Cleveland, the Indians second baseman first picked up one hit, then another, for two hits in the same inning, according to The Blade.

"I can't remember ever getting two hits in one inning," Fischlin told The Toledo Blade afterward, "not even in my front yard."

With performances like that, Fischlin eventually saw time in 10 major league seasons, getting over 100 games in a season that year in 1982.

His playing career over, Fischlin went on to a brief career as a manager in the minors, and a longer one as a sports agent. As an agent, Fischlin has worked to get his clients top dollar on the open market while working under super agent Scott Boras.

Fischlin's playing career began in 1975, taken by the Yankees in the seventh round of the draft, out of Cal State-Sacramento.

Fischlin played two seasons in the Yankees system before being traded to the Astros. With Houston, Fischlin made AA Columbus. He then made the major league squad in September.

Fischlin stayed with the Indians through 1985, getting into at least 73 games each of his final three seasons with the club. His average those years, though, never got above .226.

Fischlin returned to the Yankees for 1986, hitting .206 over 71 games. He then finished out his major league career with one final game in 1987, with the Braves.

Soon, Fischlin turned to managing. For 1989 and 1990, Fischlin served as manager for the single-A Myrtle Beach Blue Jays. In a June 1989 game, Fischlin saw his team come back from a 4-0 deficit, only to lose in the final inning.

"Our guys did well in battling back after being down," Fischlin told The Charleston News and Courier afterward. "They can at least be proud for that."

Soon, though, Fischlin reconnected with an old friend, Boras. The two had played together in high school and Fischlin was even one of Boras' first clients when Fischlin was with the Indians, according to BleacherReport.com.

In June 2009, Fischlin responded to a dustup involving one of his clients, pitcher Mike Gosling. Gosling had asked for his release, but Gosling's old manager thought Boras was behind it, according to The Rochester Democrat and Chronicle. Boras wasn't, and neither was Fischlin. It was his client.