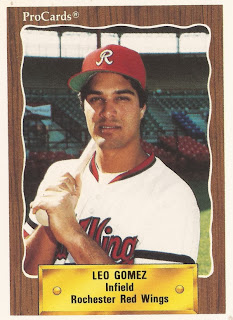 Leo Gomez liked to think of it as his opportunity, not someone else's misfortune, according to The Baltimore Sun.

But, by June 1991, Gomez was making the most of that opportunity, an opportunity that was only possible because a player ahead of him, Craig Worthington, got hurt.

"If I play like I know I can, I'll be playing every day," Gomez told The Sun in June. "It's an opportunity. Sure it is. Don't get me wrong. I'm sorry Worthington got hurt. I don't want anything like that. But the club called me up, and here I am. If I play well, I stay. That's what I want. I want to be in the big leagues 15 or 20 years."

Gomez ended up sticking with Baltimore for 118 games in 1991. And, while he didn't achieve his ultimate goal of sticking around for 15 or 20 years, he did stick in the majors for parts of seven. He then went to Japan for another six, becoming "one of the most feared cleanup hitters in Japanese baseball."

Gomez' career began in 1985, signed by the Orioles as a free agent out of Puerto Rico. He played his first season in 1986 at rookie Bluefield, getting 31 hits in 88 at bats.

The call came a month later than originally expected. Gomez was to be called up Aug. 4, but suffered an injury just before the call came, The Sun wrote.

"I almost cried," Gomez told The Sun of that August disappointment. "But then my wife told me this was not my chance. It wasn't meant to be."

In September Gomez did get the call, getting into 12 games for the Orioles, and getting nine hits.

The next spring, Gomez looked for a permanent spot on the Orioles roster. It came down to the end of spring and Gomez was hitting well.

"It's nervous time," Gomez told The Sun of the wait, "but all you can do is try to work even harder. This is it. I'm very happy with the way I'm doing. I'm very happy they gave me a chance to play. But the decision is up to the manager. Whatever he says, I go from there."

Gomez ultimately made the team in April, but it wasn't until Worthington went down in late May that Gomez found a home at third. In 118 games that year, though, Gomez hit .233. He did hit 16 home runs. He used one home run in August to break out of a slump.

Gomez returned for another 137 games in 1992, improving his average to .265. In the field, Gomez also helped turn an August triple play.

Going into 1994, though, Gomez was in danger of losing his job. Orioles owner Peter Angelos had to convince the front office to keep him, The Sun wrote. Gomez was a streak hitter, and showed a hot streak in May and June, hitting above .300, before going into another slump.

But Gomez also found himself in another competition for a starting job, competing with Dave Magadan for third base duties.

"I think right now, yeah, I've been doing my job so far," Gomez told The Chicago Tribune in mid-May while hitting .291. "I've put up some good numbers, so I think I deserve to play."

After his season with the Cubs, Gomez went on to play in Japan, playing for the Chunichi Dragons through 2002, hitting 36 home runs in 1999. He made another bid at the majors in 2001 in spring training with the Pirates, but returned for two more seasons in Japan.

But, in 2001, when it looked like Gomez' time in Japan was done, The Japan Times heaped on the praise, calling him "one of the most feared cleanup hitters in Japanese baseball." He did so, The Times wrote, by swinging and not looking for walks.

"The only one who gets paid for walking is the mailman," Gomez frequently said, according to The Times. The Times also quoted another Gomez phrase, one that originated from Gomez' father: "Always swing hard in case you hit the ball."

His playing career over, Gomez has gone on to coach and manage in the minors. For 2011, Gomez served as manager for the short-season Aberdeen Ironbirds of the New York-Penn League.