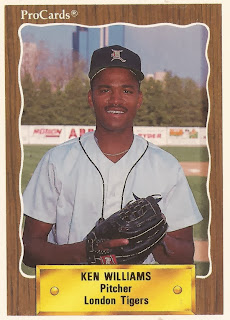 Ken Williams pitched a complete game in this May 1987 contest, but it wasn't good enough.

Williams gave up eight hits over eight innings of work for his single-A Fayetteville Generals, giving up just one earned run. Two other unearned runs, though, were the difference in the 3-2 Fayetteville loss.

Williams pitched that year in this third season as a pro. He would go on to see time in seven seasons, but he would never see the majors.

Williams' career began in 1985, taken by the Tigers in the first round of the January draft, out of Edward Waters College in Florida.

With the Tigers, Williams started at rookie Bristol and single-A Gastonia. Between them, he got 19 outings, 11 starts. He went 3-3, with a 3.60 ERA.

Williams moved to Gastonia full-time for 1986, going 4-10 over 28 outings, 20 starts. In one July start, Williams lasted just an inning, giving up three earned.