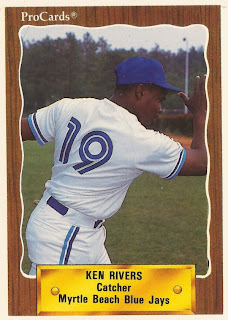 The trade involving Ken Rivers seemed like a minor one at the time, according to The Associated Press. Three years later, though, it paid dividends and then some, just not for the team Rivers went to.

In December 1990, Rivers, Junior Felix and Luis Sojo were traded to the Angels. Going the other way was Devon White and two others.

White, The AP noted, was as defensive cornerstone of the Blue Jays' world championships in 1992 and 1993.

By the time the Blue Jays won their first championship, Rivers was out of baseball, having finished a six-season career that made it to AAA, but not the majors.

Rivers' career began in 1984, signed by the Blue Jays as an undrafted free agent out of his native Aruba.

The catcher moved to short-season St. Catharines and single-A Dunedin for 1987, hitting .274 between them.

In May 1988, Rivers doubled and scored in game. That June, with Syracuse, Rivers picked up three hits in a Syracuse win over Iowa, including a bases-loaded triple.

From there, though, Rivers returned to AAA only briefly. He played 1989 at Knoxville, getting into just 40 games. For 1990, it was a move backward, playing the year at single-A Myrtle Beach. He also got a single game back at Syracuse.