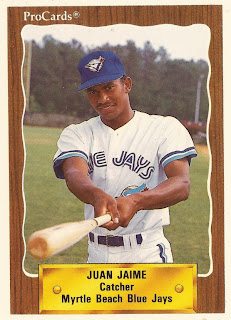 Medicine Hat's Juan Jaime came through with a hit in this 1988 contest when his team needed it most - to avoid getting no-hit.

And Jaime did it, according to The Pittsburgh Post-Gazette, on a pitch Billings hurler and Pittsburgh-native Carl Nordstrom knew would get Jaime out and finish off the gem.

"Jaime can't hit a slider to save his life, but that's what I threw when he got the hit," Nordstrom told The Post-Gazette later. "It came right back at me the size of a beach ball. I thought I'd get to it, but it was just out of my reach."

Jaime got that hit in his first season of pro ball, a season in which he hit just .213 overall. He would go on to play in four professional seasons, but he would never get the opportunity to hit in AA.

Jaime's career in pro ball began that year, signed by the Blue Jays two years earlier as a free agent out of his native Dominican Republic.

With the Blue Jays, Jaime hit the field in 1988 with the rookie Medicine Hat team. The catcher knocked in 13, stole four and hit no home runs over 61 games.

Jaime returned to Medicine Hat for 1989, getting just 38 games. He improved his average to .295, though, hitting one home run, with 19 RBIs.