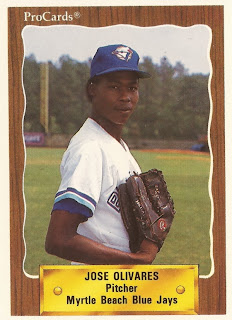 The Sumter Braves scored their first run of the night off reliever Jose Olivares. But it was the only run Olivares would give up over two innings of work, according to The Sumter Item.

That run on this July night in 1989 also ended up not mattering as Olivares' Myrtle Beach Blue Jays won the game by a score of 5-2.

For Olivares, that run was one of 49 he gave up on the year for Myrtle Beach over 86 innings. It was is third season as a pro, he would get just one more.

Olivares' professional career began in 1985, signed by the Pirates as an undrafted free agent out of his native Dominican Republic.

With the Pirates, Olivares started in the rookie Gulf Coast League. He got nine outings there, posting a 6.75 ERA. Olivares returned to the GCL for 1986, getting into another six games, with a 2.08 ERA.

Olivares isn't recorded as playing in 1987. For 1988, though, he signed with the Blue Jays. He played that year beween rookie Medicine Hat and short-season St. Catharines. Between them, he had a 3.61 ERA.