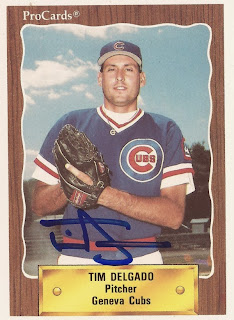 Playing in the Puerto Rico Baseball League, Tim Delgado got to face major leaguers and those close to making the majors. And he got to do it having just one pro season under his belt.

He got some good experience, getting 11 mop-up innings. But he also got to watch, and learn.

"The good thing about that experience is it taught me, very early on, that I needed to out-work, out-prepare and be more conscientious than anybody around me," Delgado told The Greatest 21 Days recently, "if I hoped to achieve my goal of pitching at the highest level."

From then on, Delgado said, he started charting hitters, taking notes and even charting umpires, "doing all the little things I felt would give me a competitive advantage."

Delgado used that competitive advantage to pitch a decade in the pros, playing in the minors, winter ball and in Asia. Delgado, though, was never able to take it to the majors, injuries ultimately slowing, and then ending, his career.

Delgado spoke to The Greatest 21 Days recently by phone from his Houston-area home. He talked of growing up in Michigan, then setting out for Arizona and Florida, believing that was his path to the pros.

When he got there, he impressed enough to play four seasons, and get a regular slot in winter ball. Then came Taiwan, injuries and a post-playing career in real estate development.

Delgado got that invitation to winter ball in Puerto Rico after spending his first year at short-season Geneva. A good outing one night and a chance encounter with an opposing team official helped get him the invitation.

Delgado recalled going down to Puerto Rico, feeling good about himself and thinking he had the game where he wanted it.

Then he saw players like Roberto Hernandez. Hernandez went on to play in 17 major league seasons. That winter, he was a guy who had obviously great mechanics, but a guy who had spent five seasons in the minors.

"I'm thinking to myself my goodness," Delgado said, "if a guy that's got that kind of electric stuff, ... if this guy is having trouble breaking through, then what chance does a guy like me have walking it up there 90-91 tops?"

But Delgado also attached himself to Hernandez, the two becoming friends, he recalled.
From there, Delgado returned each winter over the next few years, gaining confidence as he pitched against big league hitters. During the summers, he played in the minors for the Cubs.

He played 1991 at single-A Peoria, marrying his now-wife at season's end. For 1992, he moved to high-A Wiston-Salem, also getting six outings at AA Charlotte.

In 1993, Delgado returned to high-A, at Daytona. In 17 outings there, 13 starts, Delgado put up a 1.70 ERA. He then returned to AA, at Orlando, getting nine outings, six starts, there. For his work in 1993, Delgado was named a Cubs organizational All-Star.

Going into 1994, with his success the previous year and another successful winter in Puerto Rico, Delgado was looking ahead to continuing to advance, to AAA and maybe even the majors.

The first step was getting to big league camp, something he said he was told he would be invited to. As it turned out, the Cubs had invited too many veterans to camp, among them Anthony Young, who had lost 30 decisions over the previous two seasons for the Mets, 16 in 1993.

There was just no room for Delgado in big league camp.

"I remember quite clearly thinking I may not have any big league experience, but there is no way in hell I would lose 20 games if you ran me out there," Delgado recalled. "You have to figure out new ways to lose to lose 20 games."

Frustrated, Delgado started talking to some of his winter ball coaches. If Delgado could get his release from the Cubs, the Mets were interested. They had a spot for him in big league camp, and one in AAA, he recalled.

That made Delgado feel he was wanted. Now, he just had to get his release.

So, as respectful as he could, he went in to speak with Cubs officials, including minors coordinator Rick Patterson. The answer: A resounding 'No.'

When asked what he would do, if he were released, Delgado made the mistake of saying he had a job lined up. Patterson, Delgado recalled, "went ballistic." Delgado was under contract, other teams weren't supposed to interfere.
To make matters worse, Patterson also happened to soon be named the manager that year at AAA Iowa, where Delgado needed to go.

Figuring he was now doomed to not making Chicago, or even Iowa, that year, Delgado set about trying to do something about it.

That's when he went against his agent's advice and started contacting teams in Taiwan, spending one night phoning and faxing his readiness to pitch. And his work soon paid off with an offer to play for the Mercuries Tigers.

The Tigers happened to be looking for a ready arm and Delgado, despite his relative lack of experience, fit the bill.

So, that's where he went. When he returned, an organizational change soon led to Delgado getting his release. After another season in Puerto Rico, Delgado was ready to return stateside, and get his first shot at AAA, and maybe even the majors.

Then, in an exhibition game, right before the team broke for Buffalo, Delgado pitched. The result: An injury that soon ended his affiliated career, and likely his best chance to make the majors.