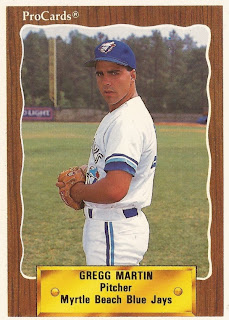 Northwestern's Gregg Martin was expected to attract some scouts to watch him pitch in a May 1989 series against rival Iowa, The Chicago Tribune wrote.

In the end, it was the scout from the Blue Jays that mattered for Martin. That's because it was Toronto who selected Martin in the 21st round of that June's draft.

Gregg Martin's pro career began that June in 1989, the Blue Jays assigning him to short-season St. Catharines. There, Martin got into 19 games, three starts. He went 4-3, with a 4.10 ERA.

For 1990, Martin turned stopper. Playing between single-A Myrtle Beach and high-A Dunedin, Martin saved 22 games while putting up a 2.70 ERA.

Martin came into a jam in a July 1990 contest for Myrtle Beach, but got out of it with two strikeouts and a fly out, according to The Sumter Item. In late-August, Martin picked up his fifth Dunedin save, going 2.1 innings without giving up a run.

Martin returned to Dunedin for 1991, but his season only consisted of 13 outings. In those outings, though, he put up a 1.12 ERA and saved five games. He picked up his third save in early May.

Martin returned to the field for 1992, sent back to Myrtle Beach on a rehab assignment, according to The Toronto Star. Martin got into 39 games, saving 27 of them, but it was his final season as a pro.

In April 1991, when Jon Martin realized his career was over, he looked at his brother Gregg. Jon Martin had yet to get his degree. Gregg had already gotten his.