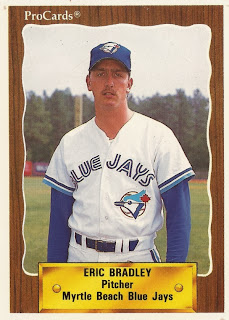 Eric Bradley came in and did what he needed to do. He also picked up the save.

In this June 1990 contest, Bradley's Myrtle Beach Blue Jays were up 4-1 and Bradley came on to finish off the Sumter Braves. He did so by giving up one hit and no runs. It was his fourth save on the year, according to The Sumter Item.

Bradley went on to pick up four more saves for the single-A Blue Jays that year, after getting seven saves in rookie ball the year before.

For Bradley, though, those eight total saves at Myrtle Beach proved to be his last as a professional, his career ending with season's end.

Bradley's career began in 1988, taken by the Blue Jays in the 40th round of the draft, out of Laney College in Oakland, Ca.