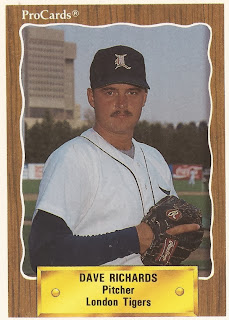 Dave Richards gave up three early runs in this 1995 contest, but he then gave his team a chance to come back, The Brownsville Herald wrote.

He did that by setting down 12 straight, striking out nine in all to lead his Rio Grande Valley White Wings to a win, The Herald wrote.

"I'm being more aggressive," Richards told The Herald. "I'm mixing it up and my arm feels real good."

Richards that year was in his ninth season of pro ball, his second in independent ball. His affiliated career had ended in 1993, Richards reaching AAA just once and never reaching the majors.

By the time his career was over, though, Richards had seen time in a total of 16 professional seasons, including time in Taiwan. He spent the second half of his career in independent ball.

Richards' career began in 1987, taken by the Tigers in the 27th round of the draft, out of Grossmont College. He'd been drafted by the Athletics two years earlier in the 11th round out of high school but never signed.

With the Tigers, Richards started at rookie Bristol. He moved to single-A Fayetteville in 1988 and then single-A Lakeland in 1989. At both Fayetteville and Lakeland, Richards posted sub-2 ERAs working largely in relief.

Richards played 1991 between the Mariners and Astros systems. With the Mariners, Richards got his only look at AAA, playing in 10 games for Calgary.

Richards finished out his affiliated career with two seasons in three different systems, the Cardinals, Brewers and Royals, all at AA.

For 1994, Richards got his first look at independent ball, at Rio Grande Valley. He played two seasons there.

In five of those seasons, Richards played with the Newark Bears. In late June 2004, Richards set a club record with his 124th career appearance as a Bear.