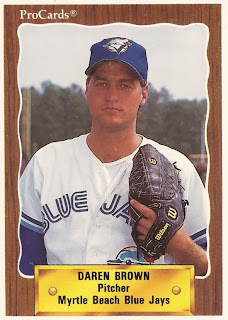 Daren Brown took over the Mariners' third base coaching duties in 2013 and Mariners manager Eric Wedge knew he was a good fit, according to The Tacoma News-Tribune.

"Brownie has obviously been managing for a long time and coaching third base for a long time," Wedge told The News-Tribune. "He's familiar with everything we are doing."

Brown was definitely familiar with the players. He'd been with the Mariners managing those players in the minors - and one brief stint in the majors - for more than a decade.

Before that, Brown managed and played in independent ball, and spent five seasons in the Blue Jays system as a pitcher.

Brown's long career in baseball began in 1989, taken by the Blue Jays in the 29th round of the draft, out of Southeastern Oklahoma University. Brown is the nephew of former big league player and coach Jackie Brown.

With the Blue Jays, Brown started at short-season St. Catharines, going 4-3 over 18 outings, 10 starts. He moved to single-A Myrtle Beach as a starter for 1990, then high-A Dunedin as a reliever for 1991.

Brown then moved to independent ball and Amarillo of the Texas-Louisiana League. He ended up playing six seasons for Amarillo, later becoming a player-manager.

In 1998, Brown reached a milestone in the young league. He was the first pitcher in the league to reach 50 career wins, according to The Amarillo Globe-News.

"I believe in throwing strikes and letting the seven guys behind you make the plays" Brown told The Globe-News, noting that the mark just meant he'd been there a while.

For 2001, Brown joined the Mariners system, managing two seasons at high-A San Bernardino. He made AA San Antonio in 2006, then took the helm of AAA Tacoma for 2007.

In August 2010, Brown took the helm of the Mariners in Seattle, becoming the interim manager after Don Wakamatsu was fired.

"He's a hard worker," Mariners third baseman Matt Tuiasosopo told The Seattle Times of Brown after his promotion. "Every day, whether it's early work or offense and defense, he's out there working. That's Brownie."