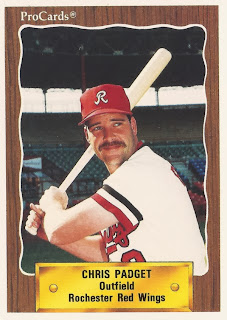 Part of it was burnout, Chris Padget admitted to his hometown Dothan Eagle in 2008. Part of it was he wanted to concentrate on his teaching.

"I started playing baseball when I was 6 years old and I have been in it for 39 years, so it is a tough thing to leave," Padget told The Eagle. "But it was like I was telling a friend of mine the other day, I would love to go watch a Masters (golf tournament) practice. I couldn’t because of baseball. Now some of those little things that you looked at doing, I can do."

"It is a little bit of burn out," Padget continued, "but I just wanted to teach and do more in my teacher's job. I want to concentrate on that."

Of those 39 years in baseball, seven of them came as a professional player, drafted in the seventh round of the 1984 draft by the Orioles. He spent all seven of those years in the Orioles' minor league system, getting as high as AAA Rochester, but never getting to Baltimore or anywhere else in the majors.

Padget was taken by the Orioles out of the University of Mississippi, where he was voted most valuable player on his team his senior year. He hit .353 that season with nine home runs and 31 RBIs. He also had seven triples, according to the Ole Miss Yearbook. He was also a factor earlier, hitting a three-run home run in a March 1983 Ole Miss win.

Padget played his first professional season between rookie league Bluefield and short-season Newark, hitting .332 with 10 home runs between the two.

He made single-A Hagerstown for 1985 then AA Charlotte in 1986, hitting .324 with 22 home runs for Charlotte. In a July game, Padget hit a walk-off, bases-loaded single against Orlando.

It was on the strength of that Charlotte season that Padget made it to spring training in 1987. In one spring training game, Padget put the Orioles ahead late with a two-run single. His performance earned him a promotion to AAA Rochester, where he would stay for four seasons, the remainder of his career.

Padget had an abbreviated 1987, getting into only 47 games with the Red Wings. But he did get two hits in one May win for Rochester. He was back for a full season 1988, but his bat wasn't. He hit just .220 with 10 home runs. He got another triple in late August, sending home a run.

With Rochester in the Triple-A Classic, Padget helped the Red Wings attempt a comeback in the deciding game with a fifth-inning single. But the Red Wings' comeback came up short, as did Padget's effort to make the majors. The championship game was Padget's last as a player.

The Eagle wrote that among the factors helping his career to an end was a knee injury. He went on to coach with Wallace College and then another high school near his home in Alabama. Then he coached eight years at his old high school Headland.