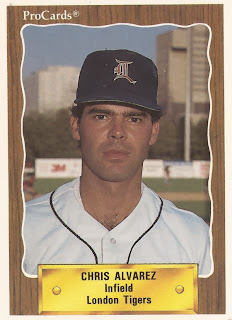 Chris Alvarez knew he still had work to do at single-A in 1986, both as a hitter and a fielder, he told The South Florida Sun-Sentinel.

But the work he had done to that point, with his Fort Lauderdale manager Bucky Dent, got him to the league All-Star game, according to The Sun-Sentinel.

"I still have to work on a lot of things as an infielder," Alvarez told The Sun-Sentinel, "and (Dent) is a great coach to have. He was really a great infielder. But I still think my power is as a hitter. I do my best as a hitter."

Alvarez went on to use his hitting and infield skills in nine pro seasons, both in the U.S. and in Mexico. Alvarez, though, never made the majors.

Alvarez' career began in 1985, taken by the White Sox in the sixth round of the January draft, out of Miami-Dade College.

With the White Sox, Alvarez played that year in the rookie Gulf Coast League. He hit .276, with five home runs.

For 1986, Alvarez moved to the Yankees, sent there with two other minor leaguers and Ron Hassey for Neil Allen and two others. There, Alvarez played at Fort Lauderdale, hitting .322 on the year and knocking in 90.

Alvarez missed two weeks that June, due to a heel injury. He came back and knocked in two runs, according to The Schenectady Gazette.

"I had only hit about three times during the time I was out," Alvarez told The Gazette. "And I didn't feel real good. So what I tried to do was go the other way (to left field). I wanted to be aggressive, though."

From there, Alvarez had a limited 1988, getting into just 33 games between Albany and Columbus. He started 1989 at Columbus, moving mid-year to the Tigers and AAA Toledo in a trade. He hit five home runs on the year, one in a June game for Toledo.