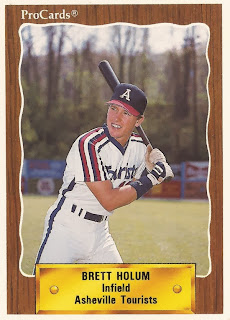 "The plan is to give the kids a little more time to play baseball in the fall for the ones that want to play the game and love the game," Holum told The Herald-Review. "This is a time to get out getting some more swings, keeping their arms in shape and having fun playing the game."

Holum spoke having once played the game himself, and playing it professionally for three seasons. Holum, though, never made it higher than single-A.

Holum's pro baseball career began in 1988, signed by the Astros as an undrafted free agent out of his hometown of Grand Rapids, Minn.

He started his career with the Astros, playing in the rookie Gulf Coast League. Holum got into six games, playing third base. He went 4 for 18.

His playing career over, Holum returned home to Grand Rapids. By 2002, he was a coach at Grand Rapids High School, filling in for the head coach.

"We played real well," Holum told The Herald-Review after that fill-in day. "We were down 6-2 in the first game and we had a little talk in the dugout and the boys came out swinging the bat."

"We really believe Reid will become a high impact player for us," Reid's St. Cloud coach Pat Dolan told SCSUHuskies.com after Reid signed. "Baseball is in the Holum bloodlines with his Dad playing professional baseball. And you know when you get a Grand Rapids player they are fundamentally sound players."
1990 CMC-Pro Cards Tally
Players/Coaches Featured:1,308
Made the Majors: 711 - 54.4%
Never Made Majors: 597-45.6%-X
5+ Seasons in the Majors: 307
10+ Seasons in the Minors: 181
Posted by Steve78 at 9:00 PM