Bill Abare came up in the fourth inning of this May 1991 contest with two on. When he was done, there was just one on, himself on third.

Abare hit a bases-clearing triple, leading his high-A Dunedin Blue Jays to a 3-2 win over Osceola, according to The Orlando Sentinel.

Abare hit that triple in his third season as a pro, one of three triples he hit that year. For Abare, though, that season was also his last as a pro, Abare never making AA.

At Polk, Abare made the state all-star team in fall 1988, called a power-hitter by The Lakeland Ledger. He also made the spring team. That March, Abare showed his skills off the field, according to The Ledger, winning a hamburger-eating contest.

Abare moved to single-A Myrtle Beach for 1990, improving his average to .251 and hitting 10 home runs. In a June game, Abare knocked in a run on a single, and also scored in a Myrtle Beach win. In a July game, Abare hit one of his home runs, a three-run shot.

Abare moved to Dunedin for 1991, but his average dropped back to .181, with five home runs. It was his final season as a pro. 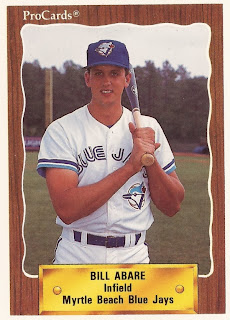