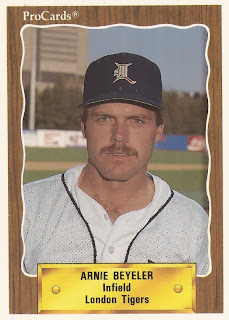 Arnie Beyeler's career began a quarter century earlier. Now, in November 2012, Beyeler finally made the majors, named first base coach for the Boston Red Sox, according to ESPNBoston.com.

"I'm speechless about it," Beyeler told ESPNBoston.com after his selection. "I'm very excited and happy for the great opportunity to work with a great staff."

Beyeler made the Red Sox for 2013 after a minor league coaching and managerial career that saw him help young players from short-season to AAA. Before that, Beyeler was a young hitter himself, one who made it to AAA, but never to the majors.

Beyeler's career in baseball began in 1986, signed by the Tigers as an undrafted free agent, out of Wichita State University.

With the Tigers, Beyeler started at rookie Bristol, hitting .251 over 65 games. He moved to single-A Fayetteville for 1987, walking and scoring in an early-April game.

Beyeler played 1988 and most of 1989 at single-A Lakeland, getting his first look at AA London in 1989. Beyeler played full-time at London for 1990, then returned there for 1991, getting a brief look at AAA Toledo, ending his playing career.

Beyeler soon turned to coaching, joining the Yankees organization by 1996. For 1998, Beyeler served as hitting coach at AA Norwich. Beyeler moved to the Red Sox by 2000, taking over as manager at short-season Lowell.

In 2003, Beyeler served as manager at high-A Stockton. Late that April, Beyeler watched his Ports lose to Modesto, 5-1.

"We pitched well, but you have to play defense, and we didn't hit enough to win," Beyeler told The Stockton Record. "When you score a run, you don't win many games. You have to score to win."

Beyeler arrived at AA Portland for 2007, managing there for four seasons. He then moved to AAA Pawtucket for 2011. Then, for 2013, Beyeler made Boston.

As the Red Sox entered the 2013 postseason, Beyeler spoke to The Providence Journal about his work in the bigs.

"A baseball's a baseball, but as far as the preparation and things that we do here, there's a ton more preparation involved than I ever thought," Beyeler told The Journal. "These guys gave me direction in spring training, let me work and have helped me along the way. I couldn't have dreamed of getting into a better situation."
1990 CMC-Pro Cards Tally
Players/Coaches Featured:1,325
Made the Majors: 718 - 54.2%
Never Made Majors: 607-45.8%-X
5+ Seasons in the Majors: 311
10+ Seasons in the Minors: 182
Posted by Steve78 at 1:00 PM