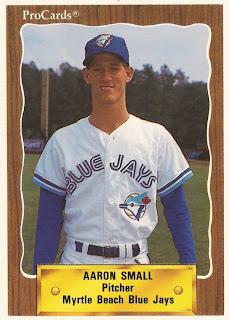 Early in the 1997 season, Aaron Small's Athletics visited the Yankees in the Bronx, watching the Yankees celebrate in raising their 1996 World Series championship banner, according to The Associated Press.

It was a celebration that Small and the Athletics helped spoil. Small went three innings of relief in the game. He also ended up with the win.

"This is my first time in Yankee Stadium," Small told The AP afterward. "I got caught up in the mystique, I guess, if that's the word. That was neat, it's just neat to see. A win? That's a bonus."

Years later, Small ended up returning to the Bronx, as a member of the home team. He also happened to get a few more wins.

Starting in mid-2005, Small went on a remarkable run with those Yankees, picking up 10 wins for the club in nine starts and six relief appearances. He didn't pick up a loss - all after he thought his career might be over. For that success, Small credited his faith.

Small's professional career began in 1989, taken by the Blue Jays in the 22nd round of the draft, out of South Hills High School in California.

With the Blue Jays, Small started at rookie Medicine Hat, making high-A Dunedin in 1991 and then AA Knoxville in 1992. He didn't make the majors until 1994, getting a single appearance with the Blue Jays that June.

From there, it was the start of five-consecutive seasons in which Small saw time in the majors. He made it for seven outings in 1995, with the Marlins. Small told The South Florida Sun-Sentinel that he was happy to be there, however the team wanted to use him.

"I consider this my first major league experience, because it was so weird last year, I was up and down so fast," Small told The Sun-Sentinel. "I feel like I've earned it this time. It feels like a reward. But I have to keep working hard."

Small moved to the Athletics for 1996, getting into 12 games. That early 1997 win for the Athletics was the start of a season in which Small got into 71 total games, by far his highest number. He went 9-5, with a 4.28 ERA that year, all in relief.

After 47 outings between Oakland and Arizona in 1998, Small returned to the minors. From 1999 through 2003, a span of five seasons, Small continued playing, but he got just a single major league outing. That was in 2002 with the Braves.

In 2004, Small returned to the majors, getting seven outings with the Marlins. By July 2005, though, Small thought his career was over, according to The New York Times.

Playing at AAA Columbus, Small hadn't been called up despite a string of pitching injuries. So, Small spoke to the team chaplain, The Times wrote

"I didn't feel like my heart was in the game anymore," Small told The Times. "I told him: 'I'm just releasing it to God. I surrender. I'm tired of doing it myself. Pray with me.' I wasn't looking for a sign. Just some peace."

What he got that evening was his call back to the majors. Small ended up getting into 15 games for the Yankees, nine starts. His ERA came in at 3.20, His record came in at 10-0. It was a performance that earned him an invitation to Old-Timers' Day in 2009.

In his retirement, Smalls survived a near-fatal bout with encephalitis. He had to learn how to walk and talk again, he told The New York Daily News. But he made it back six weeks later for that 2009 Old-Timers' game.