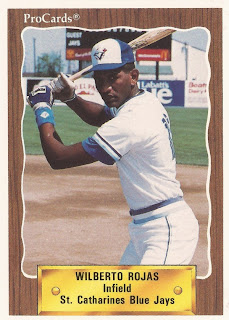 Wilberto Rojas got his start with the Blue Jays in his native Dominican Republic.

As a 19-year-old in 1988, Rojas played for the Santo Domingo Blue Jays in the Dominican Summer League, according to The Toronto Star.

From there, he went straight to Canada, playing rookie ball in Medicine Hat, then short-season ball in St. Catharines.

With the ultimate goal was to play in Toronto, Rojas never got the chance to play in a team based in the United States. He also never got to Toronto.

A native of Haina, D.R., Rojas' professional career began in 1987, signed by the Blue Jays as an undrafted free agent.

After playing summer ball in the Dominican Republic, Rojas moved to rookie Medicine Hat in 1989. There, he got into 55 games, hitting .223, with six home runs and 26 RBI.

For 1990, Rojas arrived at short-season St. Catharines. He got into 63 games there, but didn't hit much better than he did in Medicine Hat. He hit just .231.

That season in St. Catharines ended up being Rojas' final year in the minors, Rojas didn't return for 1991.