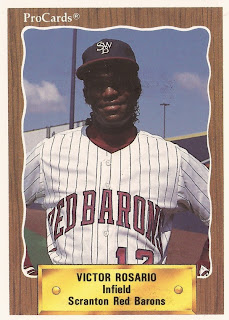 Victor Rosario had earned his promotion to AAA in 1989 and the Reading Phillies manager Mike Hart believed he could be in the majors in a couple years.

"He's got the tools," Hart told The Reading Eagle, "he just needs to develop."

Rosario was actually in the majors by the end of the next year, but not with the Phillies, with the Braves. But this would be a short stay and Rosario wouldn't get back.

Rosario started his career with the Red Sox organization, signed as an amateur free agent out of his native Dominican Republic. He spent 1984 and 1985 at short-season Elmira. He didn't make AA until 1988 at New Britain.

Rosario never hit well. In 26 games at single-A Greensboro, Rosario hit .301, helping him there was a run-scoring double in a May game. But, back at Greensboro in 1987, Rosario hit just .219.

Rosario's season at New Britain was his last with the Red Sox, traded late in the year to the Expos, who then flipped him to the Phillies.

Reading manager Hart later called the deal to get Rosario a steal. In a May game, The Schenectady Gazette described Rosario start a "snappy" game-ending double play. But Rosario needed to work on his hitting, Hart told The Eagle.

"He needs to develop the bat," Hart told the paper. "He was a raw-type player when he came. I think this was the first time he came into a situation where he had to learn how to handle the bat."

At Scranton that year, Rosario hit .258 in 56 games. He returned for 1990, hitting .252. It was in early September that the Phillies completed the trade that landed him with the Braves. The deal sent Dale Murphy back to the Phillies.

Rosario landed in Atlanta with the big club. The stint included nine appearances, the first Sept. 6, the last Oct. 3. In eight total plate appearances, Rosario got one hit, Sept. 28 against Houston.

Returning to AAA for 1991, Rosario started at Richmond, before being traded to the Tigers for Dan Petry. He hit .300 between the two, but didn't get called back up. Another year at Toledo and an average drop to .202 and Rosario's time in affiliated ball was done.

Rosario played with independent league teams through 2000, according to Baseball Reference, and he was done.