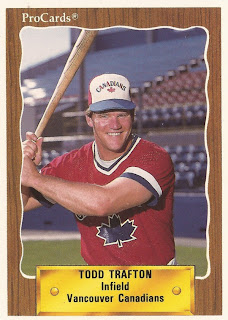 In his second look at AAA, Todd Trafton couldn't help but look ahead at the possibilities, namely the possibility that he could make the majors.

"Every year you think, 'Maybe the breaks are gonna go my way this year,'" Trafton told The Daytona Beach Sunday News-Journal in June 1991. "Who knows, maybe I'll get hot. You play all these years since little league, and you want to get up there."

Trafton was in this sixth professional season in 1991 and he ended up hitting .285 with nine home runs in 75 games at AAA Nashville that year. Trafton, though, went on to play in affiliated ball into 1995, but he would never take that last step to the majors.

Trafton turned pro in 1986, the same year he helped lead the University of Arizona to the College World Series title.

In one late-tournament win, Trafton hit a two-run home run and walked with the bases loaded.

Trafton went to Arizona after turning down a sixth-round selection by the White Sox out of high school. He turned down the offer and chose college, because he didn't get the money he wanted.

"If you get the kind of money you want," Trafton told The Orlando Sentinel later, "you can always go back to school. If you don't get what you want, you're better off going to college."

Trafton finally signed in 1986, selected again by the White Sox, in the fifth round. He started at single-A Peninsula, moving to Daytona Beach in 1987.

He got his first look at AA Birmingham in 1988, playing there full time in 1989. At Birmingham that year, Trafton hit .259 with 12 home runs. He also branched out in the field. On Aug. 31, Trafton played all nine positions, including pitcher, in a single game.

He made AAA Vancouver for the first time in 1990, hitting just .188 in 42 games there. He moved to the Reds system for 1991, splitting time between AA Chattanooga and AAA Nashville. He did the same thing for 1992, his last full year in affiliated ball.

Trafton played briefly at AAA Tucson in 1993, then moved to Mexico. He returned stateside for spring 1995, replacement ball with the Brewers. Even at that point, Trafton was still thinking the majors was a possibility, even in those circumstances, he told The Milwaukee Sentinel.

"Every time I put on that uniform, I dream about playing in the big leagues," Trafton told The Sentinel that March. "This is an opportunity for me to say that I did something even though it may have an asterisk behind it."

Trafton played five games at AAA Indianapolis that year and 13 games at independent Bridgeport in 1998, ending his career without making the majors.