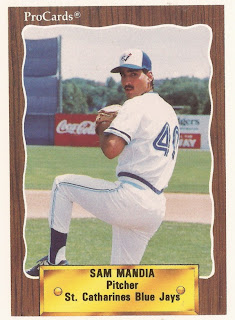 Sam Mandia started college baseball off poorly. His first two seasons were bad, he recalled to his hometown Newburgh-Beacon Evening News in June 1990.

But then came his third year, and improvement with renewed dedication and a knuckle curve. That June, Mandia hoped that improvement would continue in the pros, to the major leagues, he told The Evening News.

"I stand a good chance" of making the majors, Mandia told The Evening News after being selected in the draft by the Blue Jays. "I got better as I got older. Hopefully I can better myself with the help of the (Blue Jay) coaches."

Mandia's career began that June, taken by the Blue Jays in the 22nd round, out of Seton Hall University. He went to Seton Hall out of Marlboro High School in Marlboro, NY.

At Seton Hall, Mandia led his team in strikeouts that year in 1990, sitting down 78 batters, according to the school media guide.

With the Blue Jays, Mandia started at short-season St. Catharines. He got into eight games there, with a 2.70 ERA, before being promoted to single-A Myrtle Beach.

The promotion came after a bad outing, Mandia's mother told The Evening News. Mandia thought he was being dropped down. Instead, he was going to Myrtle Beach.

At Myrtle Beach, Mandia did better. In nine outings, 14 innings of work, he gave up just a single earned run.

"Myrtle Beach was great," Mandia told The Evening News after season's end. "I had a really good ending to a good year. I'm just glad everything is working out like it is."

Then came his 1991 season. Mandia returned to Myrtle Beach, getting into 22 games in relief. He saved five games and lost three. His ERA hit 3.86. By early July, though, Mandia was done, released.