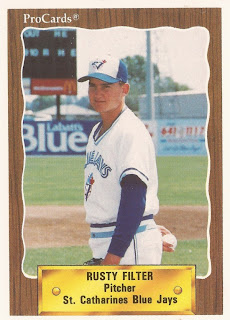 Mission Bay High School starter Rusty Filter had a good sense about his fellow pitchers in 1986, according to The Los Angeles Times.

"I think our pitchers are pretty much smarter," Filter told The Times that May. "Our pitchers know the hitters better. All our pitchers throw hard and they don't walk too many batters. They mix it up. They don't have to rely on just one (pitch) working to be effective."

Filter went on to take that good sense to college and the pros as a pitcher.  But, what Filter has become known for is the sense he takes to being a college pitching coach, using that to mold young arms.

And that sense has turned out some of the top college pitchers in recent years, including two out of the last five top overall draft picks, sending Stephen Strasburg to the pros first overall out of San Diego State in 2009, then moving to Stanford and doing the same for Mark Appel in 2013.

Filter's road to becoming one of the top college pitching coaches began as a pro player himself, taken by the Blue Jays in the 35th round of the 1990 draft, out of San Diego State.

His pro career, though, ended up being brief, just 19 outings. He spent those outings at short-season St. Catharines, picking up two losses and two saves.

Filter's pro career over, he returned to San Diego State as an assistant and junior varsity coach. He then remained at San Diego State through 2009. Along the way, according to his Stanford bio, Filter saw a total of 58 pitchers drafted.

"We ran him out there and put him in every hot-box situation that we could," Filter told ESPN. "There were times we would intentionally walk someone to load the bases and tell him he had to strike out the next two guys and he was delivering."

In August 2009, two months after Strasburg was taken first-overall by the Nationals, Filter took over pitching coach duties at Stanford.

Stanford head coach Mark Marquess was happy to have him, according to Palo Alto Online.

"We are fortunate to get a coach with his talent and experience to come aboard," Marquess told the site. "I think our pitchers will truly benefit from his pitching philosophy."