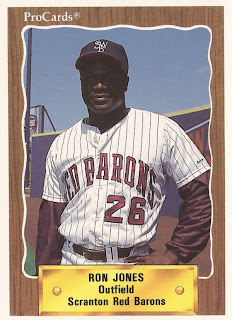 Ron Jones made his major league debut in late August 1988. By mid-September, he was hitting .311 overall and .365 in his last 11 games. He was also impressing Phillie brass.

"Ronnie continues to open some eyes," Phillies Manager Lee Elia told The Allentown Morning Call. "He's making it a healthy situation for us. One thing this team has lacked is a sense of competitiveness for a position on this club. It ought to be interesting for Opening Day 1989. Jonesy and Ricky Jordan are making a strong impression."

For Jones, he would return to Philadelphia for 1989. But his stay would be shortened by knee problems. Those injuries would linger, cutting Jones' major league career short after parts of four seasons and 97 major league games.

Jones' professional career began in 1984, signed by the Phillies as a free agent. He played 1985 at short-season Bend. The next year, he got a look at AAA Maine.

Jones got his call-up in August, debuting with Philadelphia Aug. 26. He quickly hit a two-run single, helping the Phillies to a win Aug. 30. He also got three hits in the Sept. 12 game.

"The whole key is staying back; I can't go wrong if I do that," Jones told The Associated Press after that three-hit game.

Jones made the Phillies going into 1989. He hit .290 in April with two home runs. Then came the April 18 game against the Mets. In the eighth inning, Jones made a great catch, but also banged his knee.

Jones went on the disabled list. He didn't play again that year.

"Losing Ronnie is going to hurt us a lot," Phillies Manager Nick Leyva told reporters. "He was a big part of our club. He was going to get a lot of playing time."

His season in 1990 didn't go much better. He played 44 games at AAA Scranton, then got 24 games with Philadelphia. He hit .276 for Philadelphia.

His 1990 season ended that June 30, when he tore a ligament in his knee tracking down a line drive. Phillies physician Dr. Philip Marone was confident Jones would come back.

"As far as timetable, I can't really say at this time," Marone told The AP days later. "Knowing him and how hard he worked last year, he'll work as hard this time around."

Jones came back, playing 28 more games for the Phillies in 1991, ending his major league career. He played two more seasons in the minors. His last credited time playing was in 2000 with the independent Texas Louisana League Rio Grande Valley White Wings.

Jones went on to be partners in the Big League Baseball Academy in Tombull, Texas, with former major leaguer Charlie Hayes. Jones continued with that until his death in June 2006 of natural causes.